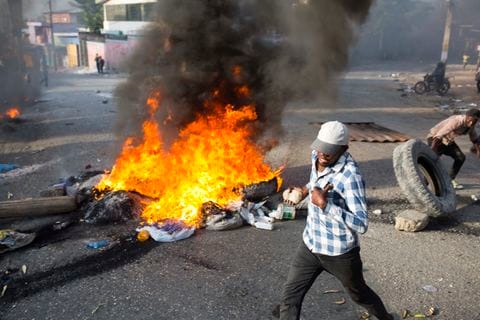 At least three people were reportedly killed here on Friday as Haitians protested following a government announcement of a hike in the price of gasoline.

The police report that two of the protestors were fatally shot when they clashed with the police in the capital.

The third person killed was a security guard for a former political candidate who was stopped at a barricade.

Early Friday, the government said that starting this weekend the price of gasoline would be increased by 38 per cent, diesel by 47 per cent and kerosene would see an increase of 51 per cent.

According to government officials, the fuel price rise is in compliance with an agreement made with the International Monetary Fund (IMF).

Shortly after the announcement, hundreds of protestors took to the streets of the impoverished nation, burning tyres and mounting roadblocks.

Earlier this year, the agreement signed with the IMF, implied the ending of subsidies for petroleum products, which are a major source of the budget deficit.

Haiti’s government justifies the decrease in subsidies by saying they unfairly benefit the neighboring Dominican Republic, where pump prices are higher.

“Each day it’s a subsidy of 5,000-6,000 barrels that we finance for the other side of the border, which is a heavy burden for our economy,” said  Minister of Economy and Finance, Jude Alix Patrick Salomon.