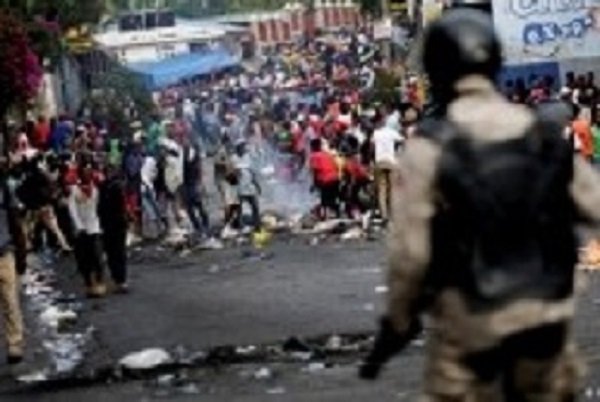 Opposition political parties Sunday vowed to resume their street protests on Monday in a bid to remove President Jovenel Moise from office.

The opposition parties buoyed by the turn out over the past few days, said that the protests would be held on Monday and Tuesday even as the Speaker of the Senate, Carl Murat Cantave, called a meeting for Sunday of all legislators to address the “political situation” in the French-speaking Caribbean Community (CARICOM) country.

“I invite all the political groups of the Senate to be represented to an important meeting which will take place this Sunday, September 29, “Cantave said in his invitation, adding “it’s an organized meeting with the different political tendencies of the great body to discuss our differences and especially address the political situation.
“The time is serious, the Senate has its word to say,” he said.

The Bishops of the Conference of Catholic Bishops of Haiti (CECH), in a September 27 letter to Moise and other senior State officials called on them to act immediately to stem the violence in the country.

“We Catholic Bishops of Haiti, we salute you all with respect and affection in the heart of the indescribable distress that we have lived as a people and citizen for more than a month in the country. It’s like we’re in a state of fratricidal war. We got there because of the behaviour of elected officials and leaders.

“Despite our repeated calls for almost two years, Haiti’s current leaders, politicians and elected officials remain deaf, busy managing their power, privileges and petty interests. Meanwhile, some sectors continue to grow rich on the backs of the poor who can neither eat nor pay for their children’s schooling.”

The CECH in its letter asked the officials to ponder on a number of questions.

“Is there violence more atrocious than living constantly in insecurity? Is there worse than the misery that takes away all hope? No people must accept misery, poverty and violence in a defeatist way. “Therefore, the highest officials of the State must assume their responsibilities to ensure the smooth running of the country and the institutions; they are morally responsible for the safety and well-being of the population. And, in the first place, the President of the Republic.”

The Catholic Bishops said that if country is on fire,” it is because of their irresponsibility.

“How can they not know what everyone knows? In a jump of awareness that they measure the extent of their accumulated failures and draw the consequences. It is now that they must act to change lives in Haiti. Tomorrow will be too late.”

Haitians have been taking to the streets demanding Moise’s resignation and efforts to get the Senate to ratify his fourth prime minister, since coming to office in 2017, have failed because supporters of opposition legislators have taken over the building preventing the ratification process.

In addition, the Haitians have been protesting a fuel crisis that has left motorists fuming and gas stations closed around the country. Gasoline suppliers are demanding as much as US$100 million they said are owed to them for previous shipments before delivering more supplies.

In a radio and television broadcast last week, Moise said that he wanted all stakeholders to come together to deal with the problems facing the country.

“I extend my hand to all the forces of the nation to form together a Government of National Unity, able to address the urgent problems of the country,” he said, adding that all actors should be involved in the initiative.

But the opposition parties have rejected his call, saying the solution to the current political crisis lies “first and foremost in the resignation of Jovenel Moïse”.

On Saturday, in Cap-Haïtien, a commune on the north coast of the country, pro and anti-government protesters armed with sticks, machetes, stones, bottles and other objects, clashed.

The action came one day after Waslin Saint-Fleur, a security officer with the Procuratorate of Port-au-Prince, was shot dead at his home by unidentified gunmen.

On Friday, thousands of protesters took the concrete in the capital and several provincial cities, in what some political observers said was the largest anti-government protest recorded in Haiti for a very long time.

There were scenes of looting, violence as the demonstrators, armed with sticks, machetes, axes and firearms, shouted hostile remarks at the government.

They erected barricades with tree trunks, old vehicle and burning tires on the main roads of the capital paralyzing most activities, forcing the shutdown of banks, schools, ministries and public offices.

A move by the government to establish a multi-party institutional unit to coordinate the clearing of public roads of barricades and other dangerous debris, was met by opposition parties urging supporters to ensure that the barricades remain in place.