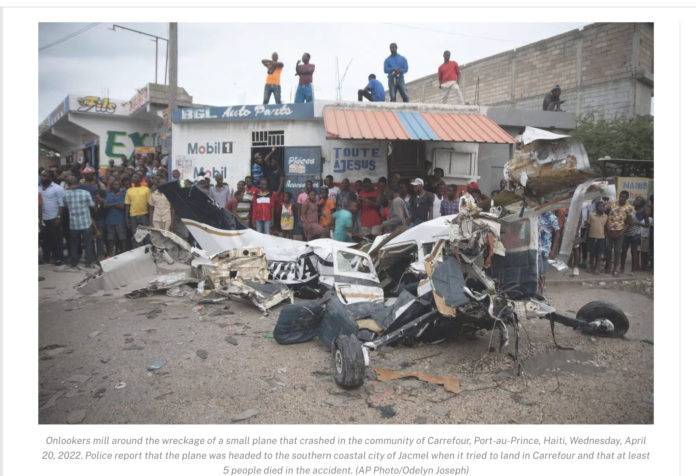 AP: Officials said that a small plane crashed into the hustle and bustle of Port-au-Prince Wednesday, killing at least five people and injuring several others.

The plane was headed to the southern coastal city of Jacmel when it tried to land in the community of Carrefour and hit a truck transporting soda bottles, said Pierre Belamy Samedi, a police commissioner for that region.
The Associated Press reported that the truck driver was among the dead.

According to Samedi, the pilot was taken to the hospital, but his condition was not immediately known. The plane was carrying five people.

According to Haiti’s National Civil Aviation Office, the plane was a Cessna 207. Additional information was unavailable at press time.

Prime Minister Ariel Henry tweeted that he was saddened by the crash and offered his sympathies to the relatives of those who died.

Nine months ago, a small private plane headed to Jacmel crashed near Port-au-Prince, killing six people, including two missionaries from the United States.