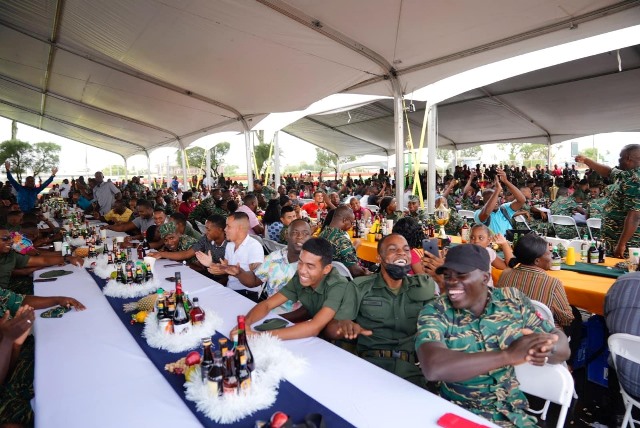 He further announced that government would provide free steel and cement to soldiers who were allocated lands.

“This afternoon I salute you and your families for the sacrifice, commitment, dedication and love you give for country and people,” President Ali told GDF members as he addressed their annual Christmas lunch at Camp Ayanganna in Georgetown.

He said his administration was keen on making the process of obtaining a loan easier for soldiers to build their own homes.

President Ali encouraged the officers to sign up and take advantage of the services, as he disclosed that on December 28, ranks will have the chance to meet with bank officials at Camp Ayanganna.

“We will help you with the plans and the design free of cost. You will get the cement and steel for the foundation and the banks will approve your loans right here so in the new year you can move to home ownership,” he said.

The head of state underscored that the GDF must be committed to giving its all for the good of the country.

“Your sacrifice is not only about yourselves, it’s about your families supporting you and allowing you to make this sacrifice to commit to any outcome that could deprive them of you,” he said.