The Economic Commission for Latin America is reporting that  Foreign Direct Investments (FDI) in Guyana increased from US$58 million in 2016 to US$212 million last year in part, as a result of the oil and gas sector preparing for First Oil. 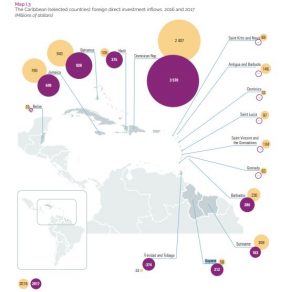 According to the commission, “Guyana has bucked the trend for the region with FDI flows to Latin America and the Caribbean contracting for the third year in a row in 2017, to US$161.6 billion  – 3.6 per cent down on the 2016 figure and 20 per cent less than in 2011.”

The report states that “FDI grew in all sectors, except in manufacturing. The energy sector received US$90 million, as part of a first wave of inward FDI related to ExxonMobil’s discovery of major oil reserves off Guyana’s coast.

While it continues with its successful exploration efforts, ExxonMobil decided to launch the first development phase of the Liza field, with an investment of US$4.4 Billion; the group aims to begin extraction in 2020 (ExxonMobil, 2017)”.

The reports notes that “the Government of Guyana hopes to take advantage of the international interest in the recently discovered oil reserves to promote other sectors, such as agriculture and mining…In the latter, Canadian mining company First Bauxite Corporation (FBX) announced a bauxite production project valued at US$50 million, with the construction of facilities set to begin in 2018.”