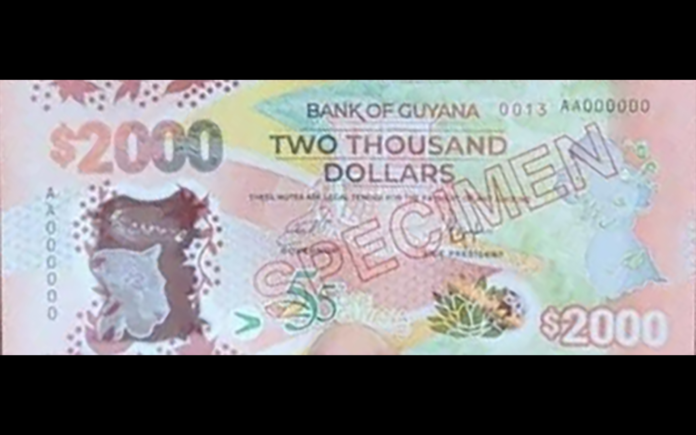 President Irfaan Ali said that the new polymer $2,000 banknote that will soon start circulating in Guyana tells a story of Guyana’s prosperous, dynamic and sustainable future.

He made the remark while examining two encased notes that were presented to him at State House by the Governor of the Bank of Guyana, Dr Gobind Ganga.

“The new note is really a presentation of Guyana—the Guyana we want to build and the future of our country. It is not just part of our currency system, it has a story behind it, and that story is about bringing prosperity, creating a platform through which all Guyanese, our children, can inherit a future that is dynamic, a future that is prosperous, and a future that is sustainable.”

The President emphasised that the note is not only about oil and gas but represents the country’s heritage, including Guyana’s first people—the Amerindians, its children and “the ‘One Guyana’ that all of us must build together.”

“It also incorporates features that we are strong in—that is our environmental credentials, so that we, even in our notes, are now taking the environment into consideration.”

The front of the note, which is ornately decorated, features the map of Guyana, the Bank of Guyana’s logo, Guyana’s national animal—the Jaguar and the label of “Guyana’s 55th Independence Anniversary – One Guyana”.

Dr Ganga described the background of the note as a stunning gradient moving from deep shades of red to gold and to a very distinctive green.

“A closer look reveals that this is actually some of the colours of our flag – the Golden Arrowhead flowing across the note,” Dr Ganga said.

He added that the reverse of the note depicts the theme of National Unity and includes imagines of Guyana’s children showcasing the country’s ethnic gender diversity.

“The images are arranged around a pictogram of ‘One Guyana’, which is evoking the unity of our people and being reinforced with our National Motto of ‘One People, One Nation, One Destiny’. A traditional pattern of our indigenous (Amerindian) people is also featured on the reverse of the note.”

Dr Ganga pointed out that the new banknote is the first polymer note to be introduced in Guyana and also the first to depict the country’s new-found oil resource, which is represented by a barrel beside the map of Guyana.

He added that the banknote has enhanced features that make it cleaner, more durable, more environmentally friendly and less likely to counterfeit.

The banknotes will also have a longer life and will be able to be recycled, which leaves a lower carbon footprint.

“If you look at the performance of the Bank of Guyana in terms of their instruments, and in terms of the stability the management of the monetary side brought to our country—ensuring macroeconomic stability—we must be proud of what the central bank has been accomplishing.”