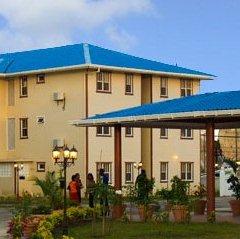 The management of Aracari Hotel and Resort at Versailles, West Bank Demerara discovered the bodies of a couple in a bathtub Sunday at about 18:00hrs.

Regional Commander, Assistant Commissioner Simon McBean, told the News Room that the couple who lived on the East Coast of Demerara, was both found dead in a bathtub in the room they rented at the hotel.

“Roughly about 18:00hrs we were informed that two bodies were found in a room at Aracari, a male and a female,” the Commander said.

“Right now we have nothing to suggest (cause of death)…we would have to go with the investigation and post mortem to assist us with cause of death,” the Commander said.

The News Room understands that the couple checked into the hotel about 15:38hrs Saturday and was scheduled to check out at 12 noon on Sunday.

However, the Commander said that the male made arrangements for a longer stay at the hotel.
When hotel management called the room and got no response, they did not suspect the tragedy that would follow.

Two hours later, after no response from the couple, they discovered the motionless bodies in the bathtub.