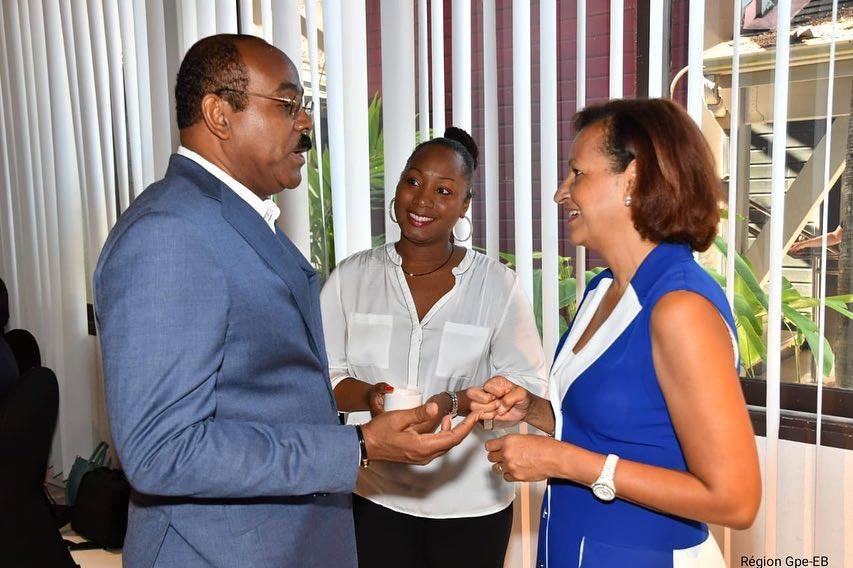 Guadeloupe on Wednesday night became the second French-speaking Caribbean country to be associated with the Organisation of Eastern Caribbean States (OECS) in an environment that St. Vincent and the Grenadines Prime Minister Dr. Ralph Gonsalves dubbed as “as a variable explanation of regional integration”.

“We are developing in the eastern, south-eastern and north eastern area of our Caribbean, a pool of integration organised institutionally in the Organisation of Eastern Caribbean States,” Gonsalves told the ceremony here to officially welcome Guadeloupe.

He reminded his audience 40 years ago, Maurice Bishop led a coup that brought the People’s Revolutionary Government (PRG) into office, making it the first government in the English-speaking Caribbean to have come into power by the bullet rather than the ballot.

“But four years after that it fell apart because of its profound immaturity. The OECS we are seeing great hope, but it’s done amidst maturity despite the youthfulness of the integration movement. We are not going to make the mistake of Grenada,” he declared.

Grenada is one of the seven full members of the sub-regional grouping that was established by the Treaty of Basseterre in 1981. The others being Antigua and Barbuda, Dominica, St. Lucia, St. Vincent and the Grenadines, St. Kitts-Nevis and Montserrat.

While Montserrat is not an independent country, it is a founding member of the grouping which in 2010 revised its treaty to establish an economic union.

In the case of Martinque and Guadeloupe, they do not belong to any, but Gonsalves said that “all the associated members are engaged in the fundamental cooperation aspect of the OECS.

“If only the Europeans were sensible, we would not have the talk of Brexit,” he aid in reference to the moves by the United Kingdom to leave the European Union.

He acknowledged that the OECS is a “young integration movement, at the same time we are maturing” expanding on his theory of “geometry of integration to fit the circumstances of our Caribbean civilisation.

“We are also going to have a tight economic pool of integration in the north western part of the Caribbean. Leaders make history but only to the extent that the circumstances of history permit them so to make,” he told the audience, adding ‘as globalisation has its knock on effects, as home-grown variations emerge in the integration process”.

He said the region will soon realise various forms of integration with Jamaica, Bahamas, Haiti, the Dominican Republic “and in time Cuba and Puerto Rico forming an alliance.

“We are witnessing before our very eyes the transformation of the regional integration movement,” he said, noting also that the countries of the Dutch Antilles “are seeking to engage us to become an associate members of the Organisation of Eastern Caribbean States.

Gonsalves, who is also chairman of the sub-regional grouping, said that the OECS in its expansion with Guadeloupe and Martinique “is in fact a harbinger of what the integration movement will be reconfigured like over the next decade or so”.

He said he was predicting that in the south eastern Caribbean “Barbados will soon sue for piece of the action in the Organisation of Eastern Caribbean States” as the sub-regional grouping spreads “its metaphorical wings. It is as though we are listening to the words, imagery of a son of Guadeloupe….”

Gonsalves said that Trinidad and Guyana “because of the extent of hydro-carbons in those countries, they are part of CARICOM (Caribbean Community) and they would be making their links between the southern and south eastern pool of integration and the north western pool.

“Belize remaining in CARICOM will form a tighter mode of integration in SICA (Central American Integration System) in the same way that Suriname will find its space in UNASAR (Union of South American Nations).

“Therefore what we are seeing before our very eyes are amazing alternations, changes in the nature of the integration movement. It is not something which is done abstractly. You are responding to the circumstances…

“If you look at the sea space and the air space on this collage, from grenade in the south…and then to the BVI and Anguilla, it is immensely large. There may well be hydro-carbons there too, but that’s a different story, we are going to have challenges as we go along because I have read very carefully the mandates given to Martinique and Guadeloupe by the Republic of France.

“But evidently, France has decided in the way in which certain other European powers have not decided that it is decidedly a Caribbean country and is prepared to engage in a meaningful way with Caribbean countries, certainly in the east and south eastern Caribbean,” Gonsalves said.

The decision to accept Guadeloupe as an Associate Member highlights the special summit of the sub-regional leaders, who are discussing among other issues the establishment of an OECS diplomatic presence in Africa, major international developments and their implications for the OECS as well as security in the sub-region.

It is also expected that the leaders will address developments in Venezuela, Guyana, Cuba’s relations with the United States and the sub-regional grouping’s relations with Canada before ending their two-day summit later on Friday.