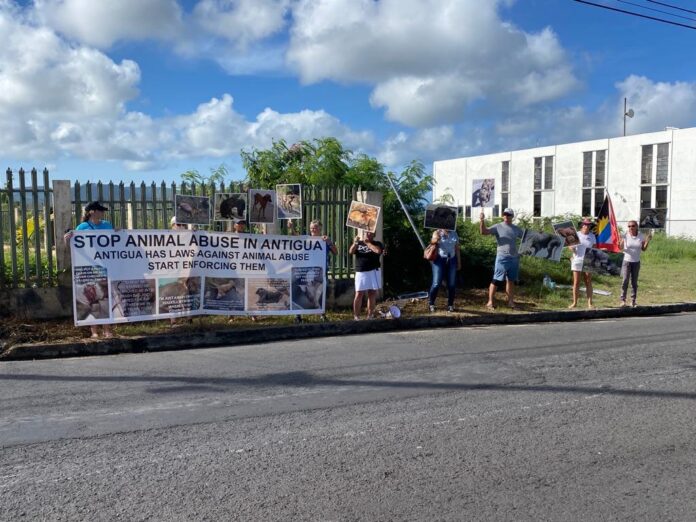 REAL NEWS: As a small group mounted a protest over cruelty to animals, outside the Parliament on Monday morning, Speaker of the House Sir Gerald Watt, Q.C. was inside lending his support to their cause and calling for jail time for those who continue to abuse animals.

The protesters – supporters of Dogs and Cats of Antigua – had vowed, last week, to take their concerns to the lawmakers during the October 24 sitting of the Lower House.

The group is hoping that its protest will force the Administration to enforce laws against animal cruelty according to the country’s Animal Health Act.

Reportedly, Chapter 6 of the Act addresses “Animal Welfare and Stray Animals” and prohibits the maltreatment of these creatures. It says, “No person shall torture, beat, injure, mutilate, neglect or treat with cruelty or overload an animal.”

According to the group, it will continue to protest until the treatment of animals in Antigua and Barbuda is addressed.

In lending his support to the cause, Watt says the maltreatment of animals here has appalled him for quite some years. Accordingly, he says it gave him some joy to see the group take this action, proving that not everyone treats animals badly.

A lover of animals, himself, having two dogs, Watt says that instead of fines being imposed, persons found guilty of cruelty to animals should be incarcerated.

The group’s aim is to protect animals from all kinds of abuse, including poisoning, stoning and attacks by cutlasses.

Earlier this month, the media published stories of two incidents involving dogs: one in which a pet was horribly burnt in an apparent acid attack and the other in which the animal’s face allegedly was cut open with a cutlass.