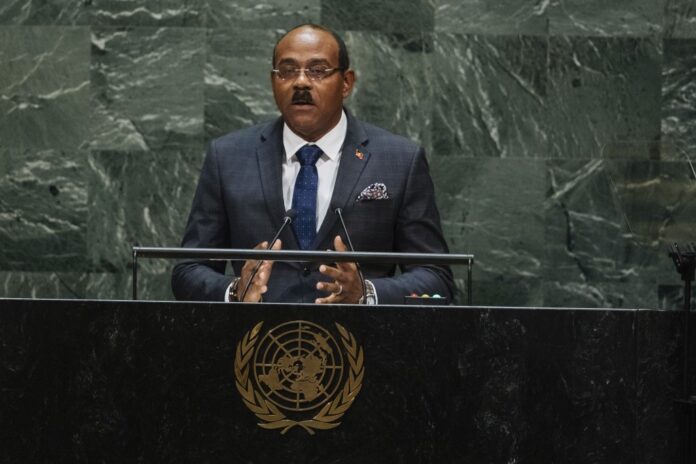 BARCELONA (Thomson Reuters Foundation) – With its tourism-reliant economy bowed by debt, and facing climate shocks and now the COVID-19 crisis, the tiny Caribbean nation of Antigua and Barbuda will require more international funding to transition to green energy, its prime minister said.

Gaston Browne, a former banker and businessman who came to power in 2014, said his island country of less than 100,000 people had decided to slow down an earlier drive to switch to renewable energy, to avoid tipping itself further into debt.

He told the Thomson Reuters Foundation that, with pandemic restrictions preventing international tourist travel, the nation’s economy was likely to shrink by about 30% in 2020-21, pushing up its debt-to-GDP ratio from just under 70% to 95%.

That is a serious problem shared by other already fiscally squeezed small island states, many of which now face a “perilous situation of debt” due to economic woes caused by the pandemic, Browne said.

“I am afraid we could find ourselves in a debt crisis and that all of the (development) gains we have made over the last several decades… could be eroded,” he told the Thomson Reuters Foundation in a phone interview.

That would reduce the ability of governments to borrow money to help them ditch dirty imported fuel oil, which most rely on as their main supply of energy, and instead install technology to move to cleaner sources such as solar and wind, he noted.

If COVID-19 results in an economic “lost decade”, on top of other pressures on island nations, pushing back deadlines to achieve carbon neutrality may be prudent, he added.

Antigua and Barbuda has an official target to cut its planet-heating emissions to net zero by 2050, but Browne said he was aiming for his country to become carbon-neutral by 2040.

He said the shift could happen even earlier – but only with sufficient help.

“If… we are able to get developed countries to provide more funding for transition into green energy, then we can say confidently that we will achieve a carbon-neutral position long before 2040,” he said.

The country’s smaller island of Barbuda – which was devastated in 2017 by Hurricane Irma, forcing the temporary evacuation of all its nearly 2,000 people – could hit that target within two years by installing solar power, he added.

In Antigua and Barbuda, fossil fuels still provide more than 90% of energy, despite early investment in solar generation with battery storage – something Browne said had not proved good value for money as the cost of solar technology has since plunged.

The island nation has poured at least $60 million into clean energy using borrowed funds, about half from the United Arab Emirates, but now wants to wait for cheaper prices and more efficient green technologies, including hydrogen, he added.

It is also lobbying donors for access to grants and longer-term funding at low interest rates for its energy transition.

The barrier it faces is that, alongside some other Caribbean island nations, it has been classed as a high-income country and thus is not eligible for grants or cheap credit.

Browne said that situation was “unconscionable” and urged financing decisions be made instead on the basis of a broader view of vulnerability that takes into account climate threats, including rising seas and more extreme weather.

Besides fiercer storms, his country is grappling with beach erosion and drought, but is trying to boost its resilience with tighter building codes, desalination plants and planting 100,000 trees a year, which also store carbon, he said.

Antigua and Barbuda and other countries in the Alliance of Small Island States, which it now chairs, want the COP26 U.N. climate talks in November to drum up more funding to help them meet targets to adopt green energy and adapt to global warming.

Browne said they would also push for progress on a long-delayed means of compensating countries that sustain “loss and damage” from unavoidable impacts of climate change.

That is not something affecting only poorer countries or island states, he noted, with U.S. coastal cities like Miami and New York also feeling the pain of flooding and hurricanes.

If greater efforts are not made by wealthy emitting countries to curb climate heating and protect at-risk communities with more finance, the flow of “climate refugees” seeking shelter in rich nations would likely increase, he said.

“If there is no climate stability, there cannot be peace and security in the world,” he warned.

Reporting by Megan Rowling @meganrowling; editing by Laurie Goering. Please credit the Thomson Reuters Foundation, the charitable arm of Thomson Reuters, that covers the lives of people around the world who struggle to live freely or fairly. Visit news.trust.org/climate