It was a gala, red carpet affair when Antigua and Barbuda’s “Grand Dame of Poetry” Mary Geo Quinn launched her ninth book “Hol’ De Line and Other Stories” last week.

Scores of nationals flocked to the Runway 10 Conference Centre to be treated to a cultural treat of music, song, poetry readings and story telling by her children and grand children and siblings.

At the ripe old age of 85, Mary Quinn is the oldest Antiguan and Barbudan to publish a book in her platinum years.

They both had high accolades for Mrs. Quinn and the sterling quality of the book stating that she stands alongside such great West Indian writers such as Samuel Selvon, V.S Naipual, and Derek Walcott.

The night was punctuated with readings of excerpts from the book by Pearl Quinn- Williams, Shara Quinn and Lydia Quinn.

Congratulatory remarks were offered by Education Officer for Zone 4, Emil Michael who recounted that his first teaching job was under the mentorship of Mary Quinn who was his Principal at Bendals Primary School. 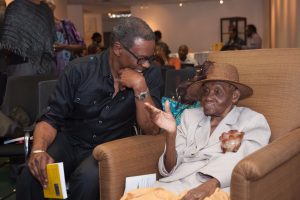 Letters of congratulation from both Governor General Dr. Sir Rodney Williams and Prime Minister Gaston Browne were also read; and books were presented by Mrs. Quinn to the Ministry of Education, the Antigua State College Library and the National Public Library.

The name Hol’ de Line is the title of one of the stories, the very first story in the book;  and was the term used back in the early nineteen fifties when estate workers went on strike for higher wages and better working conditions. 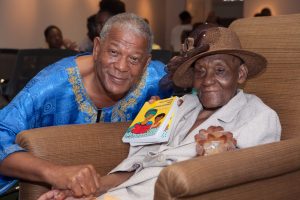 This is an educational book which gives not only beautiful literature but it also encompasses a historical perspective of people and events  in pre- independence Antigua alongside a cultural potpourri mixed in with humor, satire and social commentary.

The book has fourteen short stories and thirteen Poems epitomizing Mrs. Quinn’s mastery of both poetry and prose.

“Hol de Line and Other Stories” is published by Caribbean Educational Publishers in Trinidad and can be found in Best Of Books, the Methodist Bookstore and Cindy’s Bookstore in the Townhouse Mega store Mall.