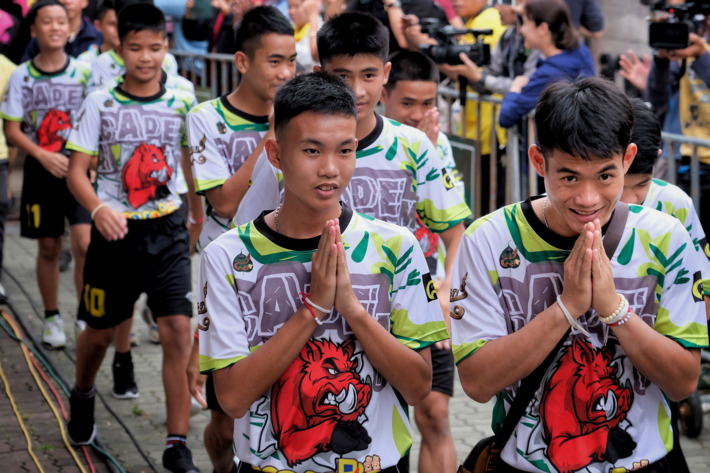 Tourism Minister Edmund Bartlett has extended an invitation to the 12 Thai boys and their football coach who were recently trapped in a flooded cave in Thailand for more than two weeks, to spend an all-expense-paid vacation in the island.

“The [Jamaica] Tourist Board and the Ministry of Tourism, through the Ministry of Foreign Affairs, will send a diplomatic note to the people of Thailand, firstly to commiserate on the difficulty of the youngsters, but also to commend the work that has been done to rescue those 12 youngsters and their coach who were trapped in the cave in Thailand,” Bartlett said.

“And so we are also asking our honorary consul in Thailand to, on our behalf, extend the invitation to the 12 young men to visit Jamaica,” he said.

The 12 boys, aged 11 to 16, and their 25-year-old coach spent 18 days stranded in the Tham Luang cave after monsoon rains flooded the cave’s entrance. They were rescued from the flooded cave by a team of international divers over three days, from July 8 to 10.

They were discharged from hospital Wednesday after recuperating for a week from their ordeal inside the cave with no food and only rainwater to drink.

The tourism minister was speaking at a welcome reception for Eurowings which will offer direct flights from Germany into Montego Bay and the return of Copa Airline flight from Panama into Montego Bay, at the MBJ Airport VIP lounge on Wednesday.

“And because we spoke about that connectivity from south-east Asia, we may very well be able to partner with Eurowings, who knows, and that medium [can] fly them here to Montego Bay,” Bartlett said.

In 1981, the former Prime Minister Edward Seaga, during a White House meeting with US President Ronald Reagan, had made a similar invitation to 52 former American hostages in Iran, for them to visit Jamaica with their families as his guests, according to a report in The New York Times.

Ministry of Tourism officials, several airline executives and crew staff were on hand for the official engagements.

Bartlett said new flights are as a result of very coordinated team efforts in Europe, Latin America and elsewhere, to further diversify where Jamaica gets its tourists from and achieve growth targets. Several tourism officials, led by Bartlett, in recent times, engaged in a series of meetings with airline executives and other travel industry leaders across the globe to draw more tourism business to Jamaica.

“In line with our aggressive growth strategies in the European and Latin American markets, these new services will aid greatly in boosting tourist arrival number,” Bartlett noted.