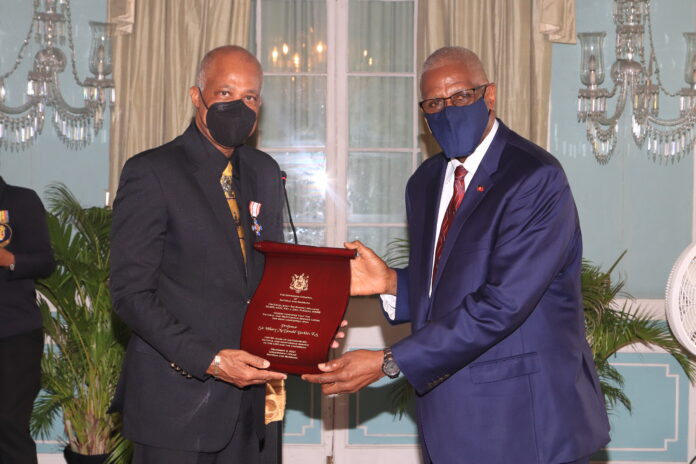 The Governor General, His Excellency Sir Rodney Williams, conferred upon Professor Sir Hilary McDonald Beckles, Vice Chancellor of The University of the West Indies (UWI), the Governor General’s Faithful and Meritorious Award’s highest honour, the Cross and Plaque, for his 40 years of distinguished, faithful and meritorious service to The UWI and the Caribbean.

The Governor General also shared that the honour was not only well deserved but a timely one, since the Vice Chancellor’s 40 years of distinguished service at the UWI also coincided with the celebration of Antigua and Barbuda’s 40th anniversary of political independence.

The lengthy citation, which outlined the many academic accolades and internationally recognized social contributions of Professor Sir Hilary Beckles, also identified his leadership at The UWI as a transformational one as evidenced by the results of his triple A management strategy of Access, Alignment and Agility. Through this strategy, the UWI was recently ranked in the Times Higher Education in the top 1.5% of globally ranked universities.

In his response, the Vice Chancellor expressed his profound thanks to the Governor General for the honour and shared that divine intervention, the influence of his parents, mentors and his hard-working team at the UWI have all contributed to making him the west Indian man he is today.

The ceremony took place in the Investiture Room at Government House  in the presence of a number of distinguished guests, including the Acting Prime Minister, Hon. Steadroy Benjamin, Minister of Education, Culture and The Creative Industries, Hon. Daryll Matthew, Board Chairman, The UWI Five Islands Campus, Mr. Aziz Hadeed and Principal and Pro-Vice Chancellor UWI Five Islands, Professor Densil Williams.