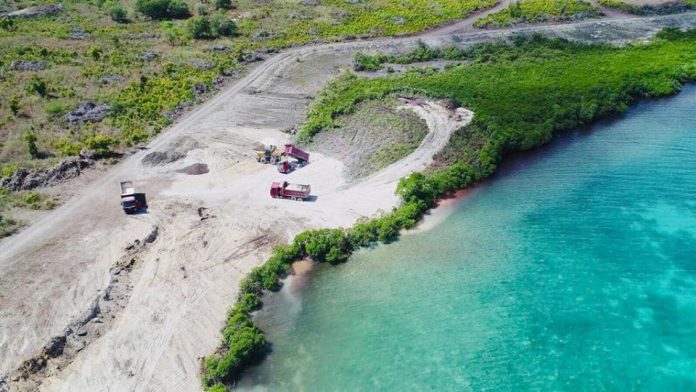 Even as government continues to warn that the development of the Yida project will “take some while to complete”, Cabinet has asked the company to press forward with plans to develop a golf course and hotel on pristine Guiana Island.

During Thursday’s Cabinet press briefing, Minister of Information Melford Nicholas said that the company continues to work on the necessary infrastructure that would support development in the Special Economic Zone (SEZ) that governs the large expanse of land owned by the company headed by Chinese investor Yida Zhang.

“There are going to be some phased developments and one of the important developments that we have looked at – and we felt that it was probably the lowest hanging fruit – would be the development of the 18-hole facility with a five-star hotel on Guiana Island,” he said, noting that the government has asked the company to give the project their “optimum consideration” at this time.

A representative of the Yida project presented findings to Cabinet last week on behalf of the company following an 18-month examination of the development.

Nicholas said plans presented on Wednesday included proposals for a number of offshore universities, hotels, business districts to include manufacturing and logistics management for the exportation of manufactured goods.

“Once the master plan has been completed and they are ready to offer that to the public, hopefully they will be able to find the type of investors to say, yes, I will be able to operate one of the hotels that is being built…,” he said.

He said one of the areas in which the company can boost its public image is through the provision of jobs for residents.

The Gaston Browne administration signed a Memorandum of Agreement with the Chinese principals after winning the 2014 general election, promising hundreds of jobs in a matter of weeks.

On April 30 2015, after the ceremony, the Yida team and government officials travelled to Guiana Island via helicopter where they turned the sand to mark the official start of phase one of the 16-zone project.

Representatives from Hard Rock International were also on hand and were expected to be responsible for the first project that Yida had hoped to start in 2016 which included plans for a hotel, casino, cafe and water park. But the project did not materialise.

The group owns Guiana Island, Crump Island and surrounding areas, a total of more than 1,600 acres of pristine, peninsula lands.

At the time, Zhang had promised to spend US$2 billion over a 10-year period, develop the largest free trade zone in the country, an off-shore financial centre, five-star luxury resort, internationally branded villa communities, a casino and gaming complex, multi-purpose conference centre, 27-hole golf course, marina and landing facilities, commercial, retail, sports and other auxiliary facilities. However, the project has been slow to see progress.

The company has, however, invited journalists and government officials to tour a metal works and cement factory in recent years. SOURCE: Observer Media