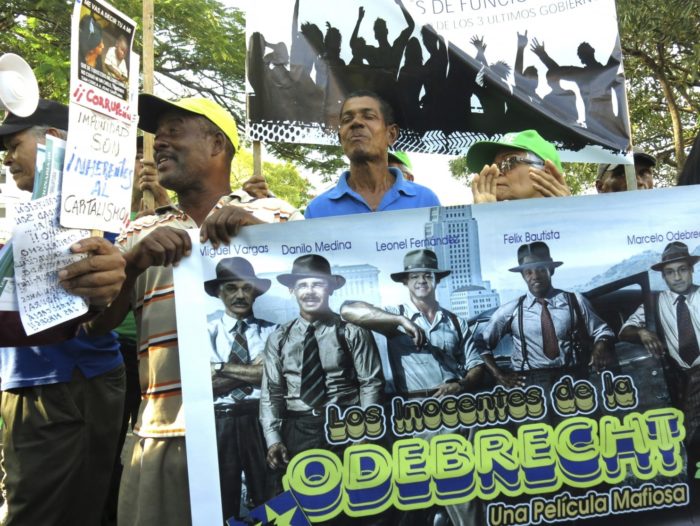 A cabinet member and nearly a dozen other people including top-level officials in the Dominican Republic’s government were detained Monday in a widening international bribery scandal involving the Brazilian company Odebrecht, authorities said.

Prosecutors said those implicated also include three legislators, a former public works minister, a former Senate president, two former directors of a regulatory electricity group and a businessman. They are scheduled to appear in court to face charges including money laundering and illegal enrichment.

“We can qualify this as an unprecedented event because of the multitude of crimes and the positions of power of those involved,” said Attorney General Jean Alain Rodriguez.

The attorney general said he would request that the suspects be held for 18 months in prison as a preventive measure while the investigation continues. Rodriguez also said he will demand that the immunity automatically granted to legislators be lifted in this case.

The suspects were detained after Odebrecht told U.S. prosecutors that it paid $92 million in bribes to Dominican officials since 2001 to secure 17 key government contracts. The company moved its “bribery bureau” to the Dominican Republic from Brazil several years ago and built highways, dams and a coal-burning power plant. Construction of the $2 billion, 720-megawatt plant was awarded to Odebrecht in 2013 even though the company’s bid was the highest of all those submitted and more than $500 million above the limit set by the country’s Congress.

The bribes were part of an overall $788 million that Odebrecht paid to officials in 10 Latin American countries and two African ones to obtain multimillion-dollar contracts with local governments.

While hundreds of charges have been filed against high-level officials in Brazil, Colombia, Panama and Peru, Monday’s arrests mark the first time anyone in the Dominican Republic is detained in the Odebrecht case.

The legislators accused automatically have immunity, although one of them, Alfredo Pacheco, said he would renounce it and cooperate with authorities.

“I am sure I have not been bribed,” said Pacheco, a former president of the Chamber of Deputies.

Odebrecht’s contracts in the Dominican Republic since 2001 have totaled $5 billion, or 7 percent of the Caribbean country’s annual GDP. Fifteen of the 17 contracts were awarded during the 13-year tenure of President Danilo Medina’s Dominican Liberation Party, now led by former President Leonel Fernandez.

Fernandez has refused to discuss the bribes. Meanwhile, Medina has created a special commission to investigate the bidding process but also defended a deal that allowed Odebrecht executives to avoid prosecution.

Medina’s administration has said investigations will clear the president and his aides of any wrongdoing and show they received no money from Odebrecht.