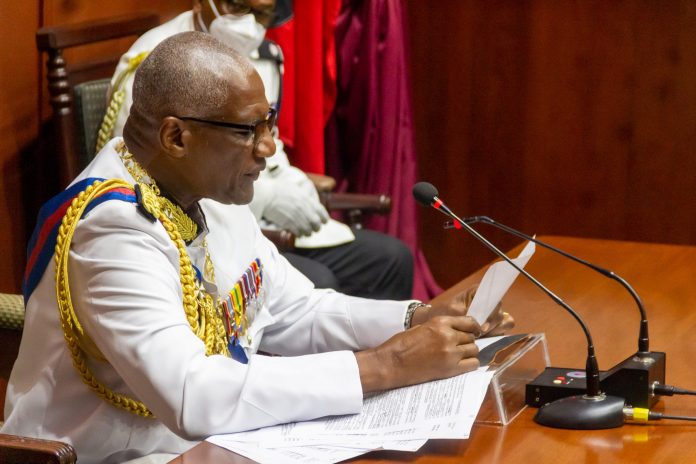 He told the Speech from the Throne: “When the Year 2020 began, the cartoonists and the social-media commentators spent a lot of ink ridiculing the refurbishment taking place on the Friars Hill Road and the Sir George Walter Highway.”

He said: “My Government sought to secure the patience of drivers and the business-owners along the commercial strips, knowing that these two highways would be examples of outstanding engineering.”

“The promised outcomes are now realized and the highways are of first-world magnificence. Sadly, their smooth surfaces are an invitation to reckless driving.

My Government urges the motoring public to please obey the speed limit and extend other courtesies intended to keep harm from being visited upon users,” he said.

Meantime the GG said, “The $18 million US Dollar grant, provided by the British Government, has been well-spent, by all appearances.

My Government has secured a loan of $168 million dollars for the APUA to strengthen the broadband product it offers by owning its subsea-cable, rather than pay usurious rental; and, there are orders placed to produce 4 million more gallons of water daily, by building greater desalinating capacity in order to satisfy the growing demand for more potable water.

As the economy expands and drought returns, demand will increase; the APUA will repair the broken pipes in order to deliver the precious commodity with little wastage.

The Minister with responsibility for the APUA receives our nation’s applause for the foresight and leadership which he has provided.”