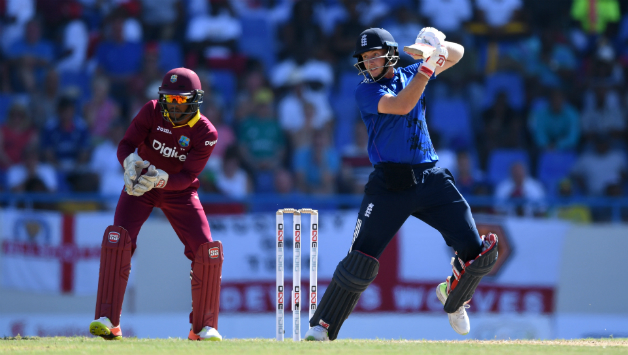 Veteran Chris Gayle struck a scintillating 25th One-Day International hundred and passed 10 000 career runs but the task of completing their highest-ever successful run chase proved too much for West Indies and they slipped to a 29-run defeat to England in an entertaining  fourth ODI here Wednesday.

Faced with a daunting target of 419 at the Grenada National Stadium after Jos Buttler and captain Eoin Morgan had pummeled high quality hundreds, West Indies appeared poised to spring a massive surprise when the left-handed Gayle smashed a breathtaking 162 off 97 deliveries.

But despite Darren Bravo’s 61 from 59 balls and Carlos Brathwaite’s maiden ODI half-century in gathering 50 from 36 deliveries towards the end, the Windies suffered a late collapse to be all out for 389 off 48 overs – their highest ever ODI total.

The hosts lost wickets in clusters as speedster Mark Wood, with four for 60, triggered a middle order collapse before leg-spinner Adil Rashid polished off the tail with with five for 85, in an anticlimactic end to the high-scoring affair.

They were seemingly down and out at 301 for six in the 36th over before Brathwaite and Ashley Nurse (43) dragged them back into the contest with a sensible 88-run, seventh wicket partnership.

But with the hosts requiring 32 runs from the last three overs and the balance tilting in the Windies favour, Rashid snatched four wickets in the 48th over to dash the hopes of a the capacity crowd.

Nurse top-edged a heave and was caught by Liam Plunkett coming around from short fine leg and off the very next ball, Brathwaite sliced to Morgan at cover, effectively ending the home side’s bid.

Devendra Bishoo and Oshane Thomas then fell without scoring to the final two deliveries of the over as West Indies lost their last four wickets without adding a single run.

With the result, England took a crucial 2-1 lead in the five-match series heading into Saturday’s finale in St Lucia.

England had earlier put on a electric exhibition of power-hitting with an ODI record 24 sixes as they raced to 418 for six of their 50 overs, their third-highest ODI total.

Buttler top-scored with 150 to claim Man-of-the-Match honours while Morgan chipped in with 103, the pair posting 204 in a magnificent fourth wicket partnership which floored the Windies.

Opener Alex Hales, in his first match of the series, stroked 82 at the top of the order while opening partner Jonny Bairstow slammed 56. The visitors took their cue from Hales and Bairstow who provided a rollicking start when they posted 100 off 83 balls to put West Indies immediately on the back foot.

While Hales struck eight fours and two sixes in a 73-ball knock, Bairstow belted four fours and sixes in his 43-ball stay.

Fast bowler Thomas (2-84) then struck two key blows, removing Bairstow playing on in the 14th over before having Joe Root caught at the wicket for five in the 18th over at 120 for two.

Hales added another 45 runs for the third wicket with Morgan before holing out in the deep off off-spinner Nurse, but his dismissal only paved the way for the Morgan and Buttler show.

Together, they put the Windies bowlers to the sword as England gathered a whopping 154 runs from the last 10 overs.

Buttler slammed 13 fours and a dozen sixes of just 77 deliveries while the left-handed Morgan faced 88 balls and counted eight fours and half-dozen sixes.

The partnership was finally broken in the 48th over when Morgan holed out to his opposite number Jason Holder at long off off left-arm seamer Sheldon Cottrell.

Needing to mount a record effort, West Indies suffered two early setbacks when John Campbell (15) drove Wood to mid-off in the fourth over and Shai Hope (5) tickled a catch behind in the bowler’s next over.

With the Windies stumbling on 44 for two in the sixth over, Gayle took matters into his own hands with his second century in three innings, following his 135 in the opener in Bridgetown last week.

More importantly, he put on an exhilarating 176 for the third wicket with Bravo who punched four fours and sixes in a stylish 59-ball innings, before posting another 69 for the fifth wicket with Holder (29).

For his part, Gayle thumped 11 fours and 14 incredible sixes – two in the seventh over from seamer Chris Woakes which leaked 21 runs and another couple in the 12th over from pacer Ben Stokes which cost 22 runs, as he raised his half-century off 32 balls.

Gayle needed only another 23 deliveries to raise three figures, reaching the landmark with a rare sprinted single in the 20th over, before motoring to his next fifty off 30 balls.

He ripped apart Rashid in the 31st over which cost 21 runs but the fireworks ended in the 35th over when he backed away and was bowled missing a tired heave at Stokes.

Bravo and Shimron Hetmyer (6) had earlier perished in the space of three deliveries in the 24th over from Wood but it was the wicket of Gayle which made the difference, with Holder following in the next over stumped off Rashid.