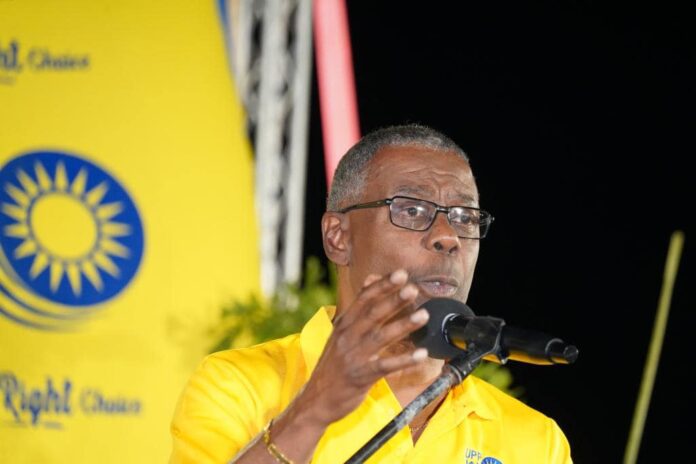 Lovell said: “In Health, he boasts about his handling of the COVID-19 pandemic – where he forced vaccines upon the reluctant and the fearful by issuing ultimatums about the jab or the job; and the jab or children’s education.

Where, like the tyrant whom he emulates, he served up teargas and rubber bullets to those who peacefully asserted their right to their own bodies, on bystanders, and even upon those who sat in their own homes on a Sunday night last August…

Where he spent untold sums on programs that simply did not work, like the monitoring bracelets, and on a satellite hospital that, up to now, millions of dollars later, sits as cold and empty as the heart of his Minister of Health.

But no pandemic allowance for the healthcare workers on the frontline – some of whom sacrificed their own health and lives.  No pillows or sheets at the hospital; not enough supplies at the clinics; an underfunded CBH and an over-extended CBH, resulting in overgrown communities and roadways and stinking gutters in St. John’s City.

A filled-to-capacity public cemetery and the almost wholesale dispatch of burials to the countryside burial grounds.

And, as Shakespeare put it – the “most unkindest cut of all:” the indignity visited upon the dead who were allowed to rot in a storage container outside Holberton Hospital.  Not even in death were they safe from Gaston Browne’s and Sir Molwyn’s failure.

In Education, much the same. Children cheated out of an education because then Minister of Education Michael Browne could not see further than the word “fortune” in Fortuna Pix.

And so, during the pandemic, when students most needed the multi-million-dollar E-books to access their virtual classrooms, the Ministry of Education was already planning the funeral for their burial at the Cooks Landfill… .  And Gaston Browne was satisfied to preside over this failure of your children.”