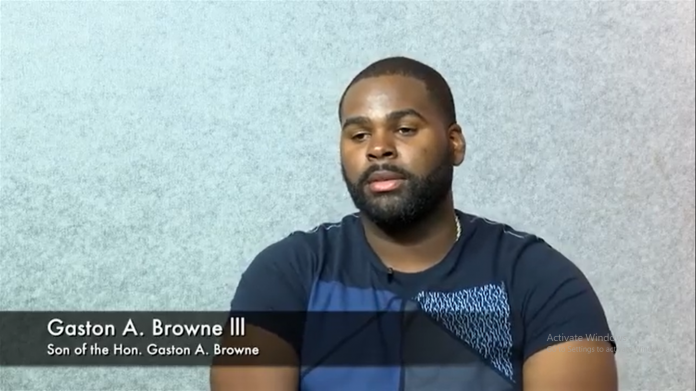 Prime Minister Browne says while no formal discussions have been held, his son, Gaston Browne III is one of two people who would most likely replace Asot Michael as the candidate for St. Peter, if the MP is charged criminally. The other is ABS Television Anchor Shermain Jeremy.

“What I’ll say here is we’ve not had any discussions and Gaston Browne III never held any discussions with me or any person about running in Parham or any constituency,” PM Browne said on Pointe FM.

“I have to admit that in terms of candidate material he will make a great candidate, I have no doubt about that. Based on his educational standing, the fact too now that he’s a successful businessman and he has great physical presence.”

On the other hand, the Prime Minister said he has had a discussion with Shermain Jeremy about the possibility of her running in the event “comrade Asot Michael ends up in any trouble with the law.”

“If comrade Asot Michael is charged for any criminal action he will not be able to run on a Labour Party ticket and would be replaced, and we always have to be prepared for any eventuality,” the ABLP Leader said.

“And I personally would have said to Shermain Jeremy that she has the type of capacity as a professional young Antigua lady to serve. Her father, the Honourable Longford Jeremy would have served in that constituency so she has pedigree, she has legitimacy, she’s educated, very smart, great presence, good character.