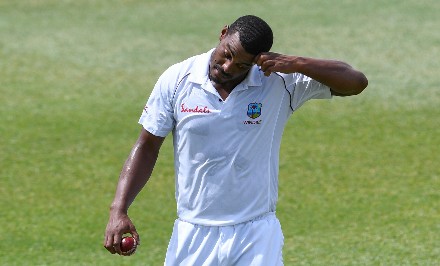 The 30-year-old was charged for player abuse following a verbal spat with Root, during England’s second innings on Monday’s third day of the final Test in St Lucia which ended on Wednesday with a 232-run victory for the visitors.

Stump microphones had not picked up Gabriel’s comments but according to media reports, Root was overheard telling Gabriel in response: “Don’t use it as an insult. There’s nothing wrong with being gay.”

An outcry from international media then followed, alleging Gabriel had made “homophobic remarks”.

Gabriel said he it owed to his friends, well-wishers and Caribbean fans “to provide an accurate record of what transpired”.

“The exchange occurred during a tense moment on the field. The pressure was on and England captain Joe Root was looking at me intensely as I prepared to bowl, which may have been the usual psychological strategy with which all Test cricketers are familiar,” Gabriel said in the statement.

“I recognise now that I was attempting to break through my own tension when I said to Jose Root: ‘why are you smiling at me? Do you like boys?’”

“His response which was picked up by the microphone was: ‘Don’t use it as an insult. There’s nothing wrong with being gay.’ I then responded: ‘I have no issues with that but you should stop smiling at me.’”

The matter was further thrust into the spotlight following the day’s play in an interview Root gave to international media.

“The ICC have got to handle things and I am not in a position to comment but throughout the series it has been played in the right manner between the two sides,” Root was quoted as saying.

“West Indies have played some fantastic cricket, they are a good bunch of guys and it would be a shame if it tarnishes it. It has been a good hard-fought series. As a player you feel you have responsibilities to uphold on the field and I stand by what I did.”

Gabriel said he had since resolved the issue with Root but was surprised it had “escalated to the point that it has”.

“I think it is fair to say neither of us expected the issue to escalate to the point that it has,” Gabriel explained.

“Nonetheless, I embrace this as a learning experience and as an opportunity for myself and all athletes to recognise the need for sensitivity and respect in their interactions with all.”

The ICC also slapped Gabriel with a 75 per cent fine and and three demerit points for the incident.