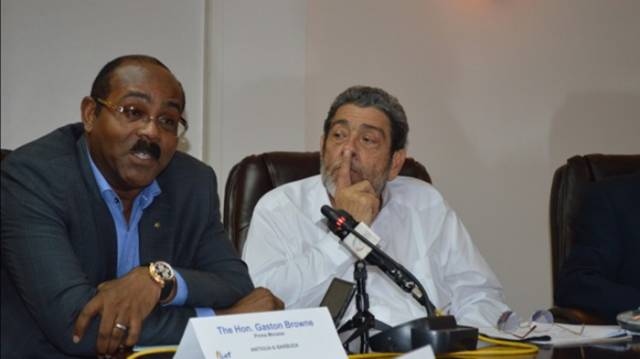 The two regional Prime Ministers at the center of the LIAT liquidation debate say they remain good friends despite their differences.

As recent as today, Prime Minister Gaston Browne said he felt betrayed by Ralph Gonsalves on the LIAT issue but that it won’t affect their friendship.

“One of the individuals I have had to take on is my good friend Ralph Gonsalves and I have no doubt that after this we will remain friends because I have every respect for him, every respect for his intellect  and even for his commitment to Caribbean integration,” Browne told parliament.

Days earlier, Gonsalves told a television interview that the LIAT issue won’t affect the relationship between himself and Browne.

“Gaston is my friend, he is my good friend. I like him very much.”

Gonsalves said he even stood up for Antigua “when there were some people last year within the region, doing a push back against the campus which Gaston wanted to have in Antigua & Barbuda.”

The Vincentian leader acknowledged that Antigua & Barbuda is more than 1 quarter of the economy of the Currency Union. “They in a difficult situation now but they have a good tourism infrastructure and once this terrible covid period is over they will bounce back up and bounce back sharply” he said.

It was only this week that Gonsalves said Browne agreed to liquidate LIAT, a claim that the Prime Minister publicly rejected.

Browne maintains however that Gonalves, his Barbadian counterpart Mia Mottley and Roosevelt Skerrit of Dominica are among his favourite colleagues in the region.

“I have no sustaining enmity for any of my colleagues much less Ralph.”