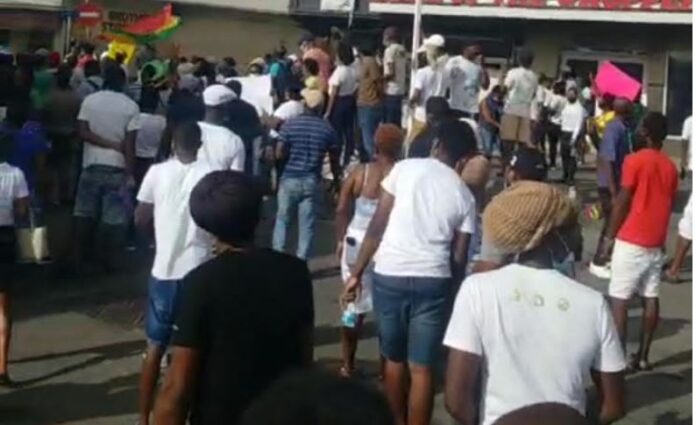 We The Freedom Fighters of Antigua & Barbuda (FFAB), wish to clarify a few misconceptions surrounding the events that took place on August 8th 2021.

On July 20, 2021, the Freedom Fighters of Antigua & Barbuda, wrote to the country’s Police
Conmissioner seeking pernission, as required by law, to March on Sunday August 8, 2021.

However, a response was not received until less than forty-eight hours prior to the
commencement of the March. This response was obtained, only after the FFAB Organization made contact with the office of the Police Commissioner requesting an update.

The Police Commissioner’s response dated August 5th, 2021, came seventeen (17) days after the request was made by FFAB to host the Event.

Despite not receiving adequate time to adjust accordingly. The FFAB took several steps to notify all interested individuals of this denial and the new actions to be taken as a result.

On August 6h, 2021, less than 24 hours after receiving the denial, The FFAB released an official statement addressing the Police Commissioner’s response and also indicating that a protest would be hosted instead of a march.

The organizers made sure to state that the peaceful nature maintained at our previous protests would be maintained at this Event. Several members made it publicly known via media posts, that the Event would no longer be a march but a peaceful protest”.

All flyers were updated and distributed with that new information.

The FFAB Organization would like to dispel any and all statements implying or expressly stating that our organization went with the intent to “march” after being denied, and/or knowingly gathered with intent to defy the known protocols. We simply gathered with the intent of having a peaceful protest, similar to all the other protests we had prior.

Within an hour into our Protest, we were met with two (2) trucks of police officers in riot gear.

Upon the arrival of the second truck, in attempt to address the crowd was made by the police using a faulty bullhorn. This made it quite impossible for all individuals present to hear exactly what was being said to the crowd. Please note that it is a Human Right to hold a peaceful assembly: no permission was required for such However, upon being questioned of the reasons for requesting the crowd to disperse the police officers gave no legal explanation.

Nevertheless, a banner was placed in front of the second truck advising us to disperse or tear gas would he used.

In less than 10 minutes after the display of this banner, several camisters said to contain
Level 3 tear gas was thrown into the crowd. Noting these events, we can safely say that the process or procedure utilized by the police was both unreasonable and unnecessary.

It is also said that a missile was thrown by a member of the FFAB giving justification to the
uprovoked actions of the police. The FFAB would like to state that no violence was incited by us prior to the law enforcements first initial use of force. The individuals present showed 110 harmful or violent behaviors to the officers or even bystanders present at the protest. Prior to the riot squad’s arrival, the crowd stood chanting and singing in solidarity standing next to the late V.C Bird’s statue.

We wish to remind that our gathering consisted of children. disabled individuals, expectant
mothers and elderly folks. These individuals, though frustrated, only chose to attend in the hope of change. yet they were met with violent acts. Our hearts are also with the individuals who were in the comfort of their homes when they experienced the fiery nature of the tear gas. We are understandably saddened to witness these actions by the police and wish to assure you that we will continue fighting for the recognition by the authorities of the constitutional rights of the people.

The FFAB does not condone violent or harmful actions and must not be held responsible for
individual behaviors or actions which are not consistent with our beliefs. All members are

advised to maintain a peaceful disposition at all protests, and we will continue to do so.
The Freedom Fighters of Antigua and Barbuda wish to remind the citizens that we are standing up for the right to make our own individual choices without coercion and/or discrimination
(whether directly or indirectly) from the current Government of Antigua and Barbuda and/or bodies of power, This Organization does not wish to be perceived as only an Anti-Vaxxers

Organization. We are standing up for Pro-Choice, Anti-Discrimination and non-abuse of power by the Government of Antigua & Barbuda. It is our aim to take a stand for und in the interest of you the people of our beloved country.