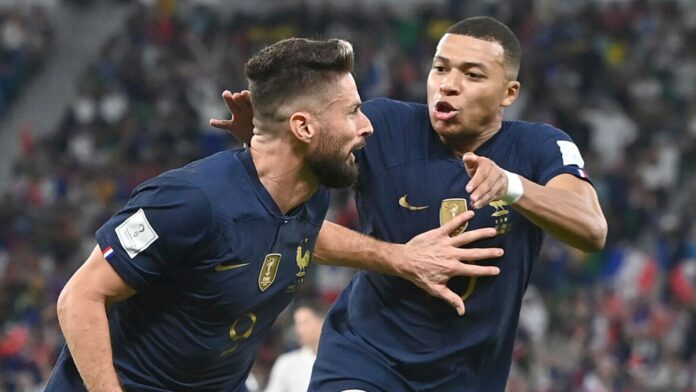 Olivier Giroud scored his 52nd goal for France to become his country’s all-time top scorer, and Kylian Mbappe added two more as they beat Poland 3-1 in the World Cup round of 16 on Sunday.

Mbappe doubled the advantage for Didier Deschamps’ men and added another before full-time to move two goals clear as the tournament’s top scorer in Qatar.

Poland had earlier put up a fight against the reigning world champions and scored a last-kick consolation after Robert Lewandoski converted a retaken penalty.

A bright start from France was low on clear chances, though Giroud should have had his goal earlier but could not divert Ousmane Dembele’s low cross from the right into the net.

Poland had opportunities of their own in the first half and were somehow denied in the 38th minute when Bartosz Bereszynski’s cut-back from the left found Piotr Zielinski, who hit his shot straight at Hugo Lloris, before his follow-up was also blocked and then Jakub Kaminski saw his effort stopped by Raphael Varane.

Giroud had his moment just before the break when some neat passing around the box led to Mbappe playing a quick pass into the striker, who finished well past former Arsenal team-mate Wojciech Szczesny.

The 36-year-old had the ball in the net again just before the hour with a spectacular overhead kick, but the whistle had already gone for a foul on Szczesny.

Mbappe struck with 16 minutes remaining to ultimately seal the win, with nice work again from Giroud leading to Dembele finding Mbappe to the left of the penalty area, before the Paris Saint-Germain star curled the ball high past Szczesny into the near post.

The Golden Boot leader put the game beyond doubt in stoppage time, again receiving the ball to the left of the penalty area before placing it expertly into the top-right corner of the net.

Poland were awarded a last-minute penalty after a VAR check for handball against Dayot Upamecano, and despite seeing his first effort saved by Hugo Lloris, Lewandowski sent the goalkeeper the wrong way with his second attempt after Lloris was found to be off his line for the first. (www.sportsmax.tv)