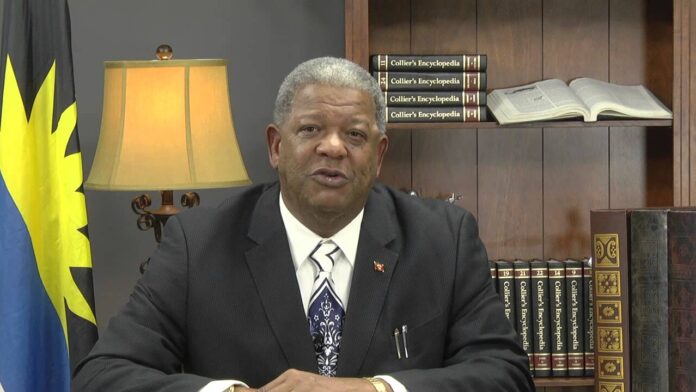 Former prime minister Baldwin Spencer says three buses donated by the government of South Korea “were not considered property of the government of Antigua and Barbuda directly,” as the trial of three former ministers accused of embezzlement continues here on Wednesday.

Spencer, 73, who led the United Progressive party (UPP) to victory in the 2004 general elections and served as the country’s third prime minister until 2014, told the High Court that “it was not a situation where the request for this endeavour was to be a government to government.

“That clearly was not the arrangement,” he added.

The trio, who all served in Spencer’s administration, were charged in October 2019, two years after Magistrate Conliffe Clarke dismissed the case. They have all pleaded not guilty to the charges.

The prosecution is alleging that while they were in public office, the trio converted the buses for their personal use and had them registered at the Antigua and Barbuda Transport Board in their names.

During the trial on Tuesday, three insurance representatives testified that the former cabinet ministers had insured one bus at each of their companies.

But, Spencer, who was also the foreign affairs minister at the time of the “donation” said in his sworn testimony that he, the late ambassador John Ashe had held a side meeting with then Ambassador of South Korea at an event to discuss the need for buses in communities on the island.

Spencer told the Court that he did not allocate the buses nor was it a Cabinet decision because “it was not a situation where the request for this endeavour was to be a government to government”.

He said that Ashe, a former president of the United National General Assembly, who died in New York in June 2016, had organised, negotiated and made most of the decisions in this regard.

Asked by attorney Anesta Weekes QC, representing Lovell, whether he understood that the buses were specifically donated to the government of Antigua and Barbuda, Spencer replied with a resounding “no.

“It was felt certainly by me that the whole question of transportation in communities, there was a need for it, and so the whole idea was to put arrangements in place for that to happen and to have the parliamentary representatives for the various communities be the custodians of these buses,” he added.

Spencer said the parliamentary representatives were to be given the buses because “it was part of his or her responsibility to provide a service to the community and to that extent to coordinate whatever has to be done to facilitate that arrangement.

Attorney Dame Hamilton QC, who is representing Quinn-Leandro inquired into why one bus was earmarked for his client’s constituency and Spencer replied “it was a situation where a request would have been made by the parliamentary representative”.

On Tuesday, an employee of the Antigua and Barbuda Transport Board disclosed documents showing that the buses were registered in the names of the three accused.