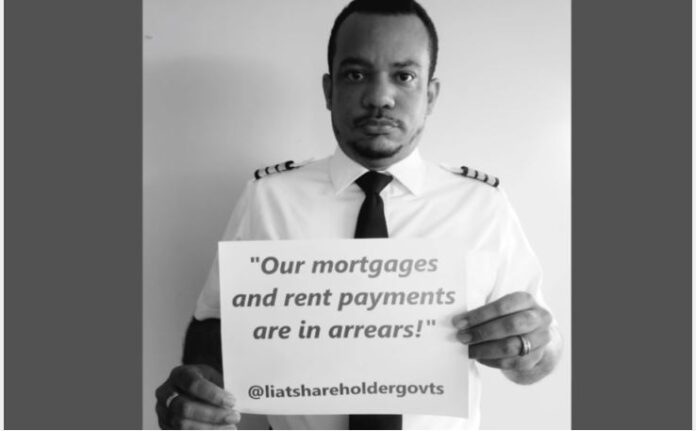 Reflecting on the “broken promises” they have been left with, a group of former LIAT employees has blasted the Mia Mottley administration for failing to pay the severance the airline has owed them for more than two years.

The distraught workers noted that not even a petition they started nine months ago to raise awareness of their plight has resonated with the Barbados Government.

“Despite 2, 273 [people] signing the petition which was submitted to the Clerk of Parliament in Barbados on June 14, 2022, unfortunately, our plight has once again fallen on deaf ears. Many of the former employees across the region are still depressed and are facing dire circumstances despite their best efforts to rebound after not being compensated in any way since 2020. Other public appeals and petitions have also been ignored,” the group told Barbados TODAY.

“The shareholder governments, namely Antigua, Barbados, Dominica, and St Vincent and the Grenadines should hold their heads in shame as they have left hundreds of their citizens and former employees in the dark as it pertains to the status of the severance due,” the retrenched airline staff added.

In the case of Barbados, the ex-employees here said Prime Minister Mottley had promised to provide an update back in June 2022, but that has not materialised.

“To date, those staffers have heard nothing from her on what the Barbados Government is doing to fulfil their promise of assisting in getting the issue of the owed severance resolved for the workers. Surely, Prime Minister Mottley could do much more to solve this unjust situation,” the ex-employees of the Antigua-based airline declared.

Minister of Tourism and International Transport Ian Gooding-Edghill has told Barbados TODAY he will look into the matter.

Meanwhile, the former workers have urged the leaders of Barbados, Antigua and Barbuda, St Vincent and the Grenadines and Dominica to follow the lead of their St Lucian counterpart who last month paid severance in the form of bond certificates to 47 citizens of that country who were among the hundreds of LIAT workers made redundant in 2020.

“Prime Minister Philip J. Pierre of St Lucia, a non-shareholder of LIAT 1974 LTD, heard the plight of the former workers from his island and sought to put an end to it. He made a promise and delivered on it. In December 2022, Prime Minister Philip J. Pierre awarded all former workers from St Lucia 100 per cent of the value of their severance owed to them by LIAT 1974 LTD.

“Yet, the four other governments of Antigua, Barbados, Dominica and St. Vincent and the Grenadines who are major shareholders of LIAT cannot find it in their hearts to end the suffering of the remaining staff members. We will not be silent about this issue! We will not stop speaking out about this injustice. We are still suffering and need to have this issue rectified immediately,” contended the former staff.

“Pay us what we are owed if there is an ounce of decency left,” they said.

They drew reference to a widely publicised offer of a 50 per cent severance payment made to the ex-workers by the Antigua and Barbuda government.

Describing that as “nothing more than a golden calf”, they said most of the staff had turned it down as it required them “to sign away their rights to their legal entitlement to full severance”.

“Some of the former employees who took that offer after being owed hundreds of thousands of dollars ended up receiving less than five per cent of what they were owed with many still waiting for funds to be sent to their accounts. Also, it is alleged that, to date, they have not received the land or bonds component that was communicated to be included in the settlement,” they said.

The group added that not only were the former employees not fully paid but promises of new employment had gone unfulfilled. “They were… promised jobs that were purportedly negotiated by the government with an airline in the United States of America, which proved to be futile as many who applied were immediately denied on the basis of not having green cards,” the former workers claimed.

They added that the administrator of LIAT 1974 LTD who was to submit a report on the resuscitation plan for the airline to the Organisation of Eastern Caribbean States (OECS) Court has been tight-lipped and had not said a word to the employees on when they can expect what is due to them.

“Yet the company continues to fly one plane under the guise of administration, while the staff remains without their due. This should not have been permitted and should not continue. The former staff of LIAT 1974 LTD continue to be treated unfairly and have been kept in the dark for the past two and a half years. Do you think this is right?” they asked.

“How would you feel if you were not paid for over two and a half years with no explanation as to when and if you would receive your severance?”