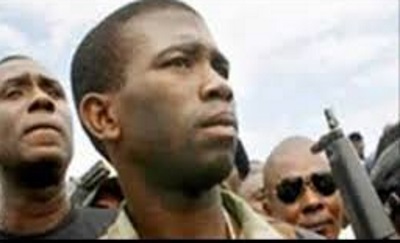 Phillipe, 49, who had been elected to the Haitian Senate in the last election, was arrested in January by the anti-drug trafficking unit of the Haiti National Police in Port-au-Prince and transferred to Miami within hours where he faced trial on drug-trafficking and money laundering charges.

He had pleaded guilty in late April to the charges under a plea agreement that saw him avoid going to trial in May on a more serious trafficking charge that could have sent him to prison for the rest of his life.

According to a statement filed with his plea deal, Philippe admitted that he not only shared the bribes from narco-traffickers with fellow officers in the Haitian National Police, but he also wired hundreds of thousands of dollars to the United States to buy a home in Broward County and support his family.

Before striking his plea agreement, Philippe had insisted that as an elected Haitian senator, he could not be charged by US authorities. He also claimed that his arrest by DEA agents amounted to kidnapping.

But the judge ruled in March that he was not protected by sovereign immunity because he had not been sworn in before his arrest outside a Port-au-Prince radio station.Philippe was charged in an indictment that was returned by a US federal grand jury 12 years ago and unsealed in January this year. According to the indictment, Philippe had been accused of cocaine trafficking and money laundering from 1997 to 2003.

As he stood before U.S. District Judge Cecilia Altonaga on Wednesday, the former police commander heard the judge affirmed the sentence agreed upon by the defense and prosecutors.

Unlike other previous court appearances that had attracted a large gathering, including his wife, only one curious spectator showed up on Wednesday for his sentencing hearing, which lasted 10 minutes.

But a handful of Haitian activists from the group “Veye-Yo” showed up outside the courthouse in support of Philippe’s incarceration.

Prosecutors Andrew Camacho and Lynn Kirkpatrick said they agreed to the lower end of the sentencing guidelines — ranging from 9 to 11 years — for Philippe’s punishment because they believed it was in line with other Haitian officials who had pleaded guilty to similar money laundering offenses.

Judge Altonaga said Philippe would be on probation for three years after serving his nine-year sentence. But she also noted that under U.S. immigration law, he would be deported immediately back to Haiti.