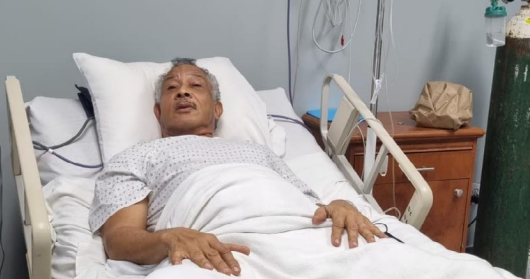 Ambassador Bernard Percival Snr, who was shot in the leg and groin by assailants as he entered his Paynters home on Tuesday night, has told Observer that he is happy to be alive.

“You could be reporting a different story today. I could have been dead. I thank God I am alive,” he told our newsroom from his hospital bed at the Sir Lester Bird Medical Centre
yesterday morning.

Percival – a former government minister – recalled that when he pulled into his driveway at about 9.39 pm he was accosted by an armed man.

“I drove into the yard. I was still in my front driveway. When I got out of the car, there was someone there. He grabbed my bag and shot me twice,” he said.

During the incident, the 70-year-old businessman was also robbed of valuables.

Percival said footage from his CCTV camera showed that two people were in the yard, however, he said, “I only saw one”.

Doctors said no surgeries were required and there was no damage to Percival’s arteries or veins.

“The bullets were not lodged so deeply into my flesh that surgery was required. The doctors said I will be fine.

In fact, I am feeling all right. I have no pain right now,” he said,
adding, “I haven’t slept since the incident.”

Residents flocked to social media yesterday to express their sympathies to Percival, who said that many others have also reached out to him via telephone calls.

“I am very happy and moved, to say the least, by all the calls and wishes from the public. I have been receiving the calls … I am truly grateful,” he added.

Police have launched an investigation into the incident and are appealing to anyone with information that could assist to come forward with urgency.