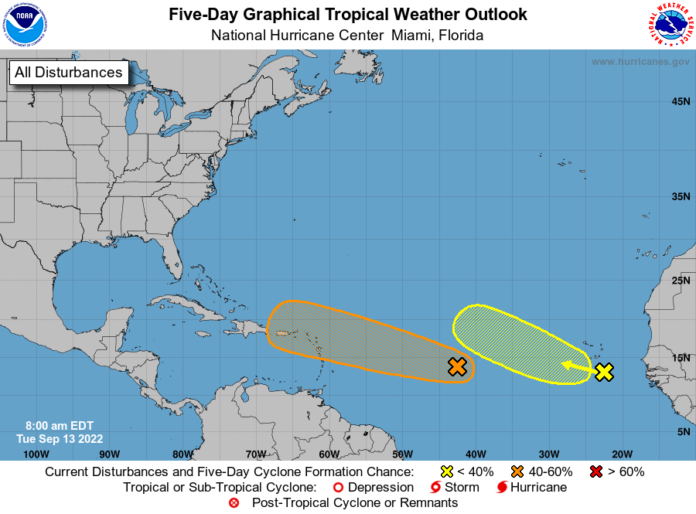 For the North Atlantic…Caribbean Sea and the Gulf of Mexico:

1. Central Tropical Atlantic:
Conventional and Low-earth orbit satellite data indicate that
showers and thunderstorms associated with a tropical wave located
about midway between the west coast of Africa and the Windward
Islands have increased and become better organized since yesterday
afternoon.

Further development of this system is possible and a
tropical depression could form over the next several days while it
generally moves westward to west-northwestward over the central
tropical Atlantic and approaches the Leeward Islands on Friday.

2. Eastern Tropical Atlantic:
Showers and thunderstorms have changed little overnight in
association with a tropical wave approaching the Cabo Verde Islands.
Environmental conditions appear only marginally favorable, and any
development of this system should be slow to occur while it moves
westward or west-northwestward across the eastern tropical Atlantic
through the end of the week.
* Formation chance through 48 hours…low…near 0 percent.
* Formation chance through 5 days…low…20 percent.