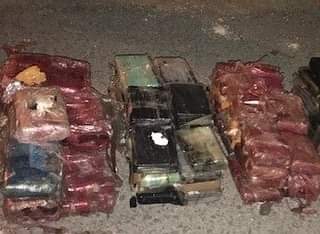 On Thursday 28th March 2019, the Office of National Drug and Money Laundering Control Policy (ONDCP) together with officers from the Customs and Excise Enforcement Department and the K9 Unit of the Royal Police Force Antigua & Barbuda were on a joint patrol on the southern side of the Island.

While in the vicinity of Urlings Wharf, officers observed an individual acting suspiciously. As officers approached the individual, he ran and disappeared into the mangrove.

While in pursuit, officers discovered several crocus bags scattered around the swampy area on the eastern side of the wharf.