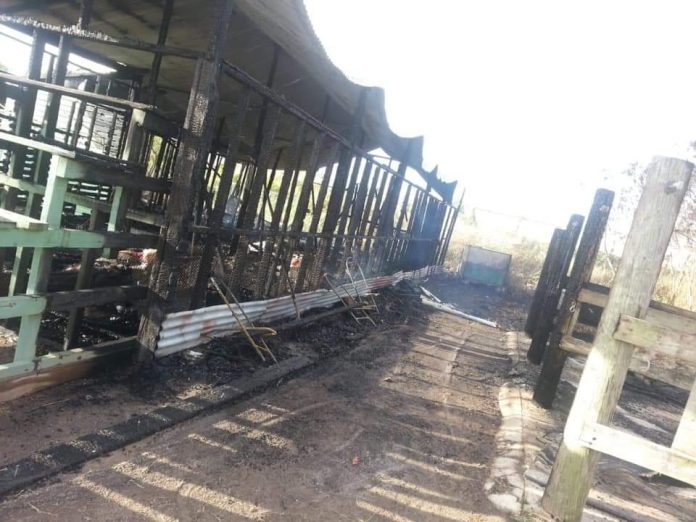 The police are investigating a fire that killed three horses at the First Triple Crown Stables at Cassada Gardens Race Track Tuesday night.

“I was called about 1:40 a.m. this morning to be advised that there was a fire at one of our stables and that horses and equipment and everything basically burnt”.

Cochrane said when he got to the scene, firefighters had already put out the fire and “everything was gone”.

He said a police officer alerted 911 after discovering the inferno at the stables.

“He came and drove around to the back and saw the stables and then he just heard a lot of horses really making a lot of noise”.

“We’re just hoping that investigators will find a cause for the fire so we can be a hundred percent sure of what the issue is and why it transpired.”

“This is one of our most recently built barns so it’s not a structure that has any significant defects; properly wired and everything”.

The Turf Club President said all the horses killed were scheduled to participate in upcoming Triple Crown Races set to begin Easter Monday.

“These horses are like our children like our family. We take care of them daily. They need more attention than children, to be totally honest and so this is a real devastating blow for us”, he bemoaned.

“We are just about at the peak of our racing season and it’s just ironic that the triple crown champion is gone down ahead of a triple crown series starting so I apologize for the emotions but that is how difficult and that is how strongly I feel about the animals”.

“I believe that the owners, who our thoughts and prayers are with, Hazelroy Barnes and his team, Jerry Roberts and his team would want us to race”, Cochrane said.

“To all the fans of Demolition Man, we will do our best to give him a really proper send off this coming Easter Monday”, the president said.