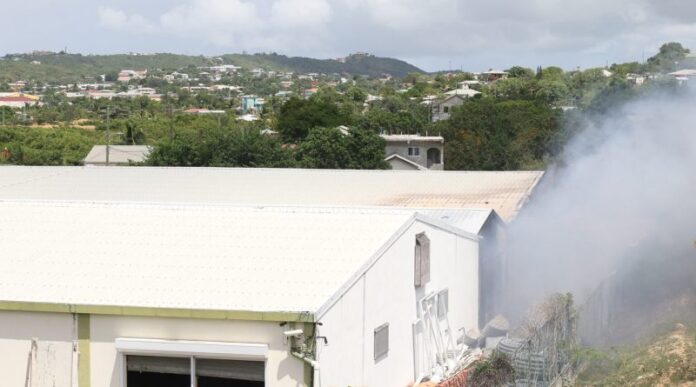 Even though it received an additional tender last week, the Fire Department still had to seek the assistance of a private water truck to extinguish a fire in Donovans on August 13.

The owner of the establishment is praising the fire-fighters, who reportedly arrived on the scene within seven minutes of the call. Their efforts to save the storeroom prevented the blaze from spreading and causing major damage.

As a result, the owner of the Luxury Villas Development Company, Fausto Fattarelli, has pledged to donate a tender to the Fire Department.

Inspector Lester Bagot, spokesperson for the Department, reports further on the incident.

Reports say that employees at the business initially had attempted to put out the blaze themselves; however, after it was getting out of control, the fire service was notified.

A manager at the business reportedly said that electrical low voltage throughout the morning may have sparked the fire.

On another note, Police Inspector Frankie Thomas says the late-July fire in Greenbay, in which four homes were destroyed, is still under investigation.

He says that both the Fire Department and the Police are looking into the incident, since human remains were found on the scene after the fire. Forensic tests will have to be done to determine the identity of the deceased.- REAL NEWS