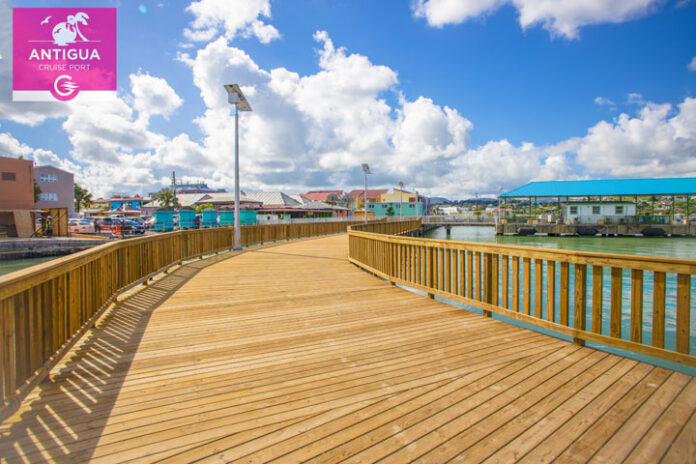 The 2022/2023 cruise tourism season was declared open yesterday amidst the bustle of thousands of passengers disembarking five cruise ships in St. John’s Harbour.

Tourism stakeholders are bullish about the winter season following a collapse of the tourism industry as a result of the COVID-19 pandemic.

With a rebound in motion, it is projected that more than half a million cruise passengers are expected to visit St. John’s by the time the season ends.

One of the highlights of yesterday’s launch was the commissioning of the fifth berth.

In his address during the ceremony, Prime Minister Gaston Browne described the docking facility as a symbol of the resilience of the people of Antigua and Barbuda.

“You’ll recall that during 2020 there was a global lockdown but we continued to build out this port facility, notwithstanding the fact that revenues had fallen by as much as fifty percent.

I want to thank GPH (Global Ports Holding) for its partnership, because without the partnership of GPH, we would not be celebrating the opening of this fifth berth.”

Further, the prime minister noted that inadequate facilities gave neighbouring countries a greater advantage in the highly competitive cruise industry. But with the required upgrades, “you can be assured that Antigua and Barbuda would have the most competitive cruise tourism product in the Caribbean region”.

Tourism Minister Charles Fernandez said with the new facility comes with opportunities for everyone involved in the industry.

This provides for greater opportunity for more vessels to be deployed to Antigua, rather than being re-deployed to an alternative port due to lack of berthing availabilities.”

“Pre-pandemic, Antigua handled about 800,000 passengers annually. With the port’s re-development under Antigua Cruise Port, through a 30-year lease agreement with GPH and the government of Antigua and Barbuda, the destination will be able to serve as many as one million cruise passengers a year, “Minister Fernandez declared.

He touted the government’s continued efforts in ensuring there are direct benefits for those whose livelihoods depend on the success of the cruise tourism industry, including a long-awaited price hike for taxi operators.

“My ministry has been successful in getting the cruise lines to commit to employ many local Antiguans and Barbudans on their cruise ships.

In addition, we are working to ensure that taxi operators at the cruise port will get an increase, which has been long in coming. We’re also working to ensure more locals get involved in excursions,” the tourism minister said.

Construction of the fifth pier was completed in February, 2021 at a cost of $30 million, but the official opening was delayed several times due to dredging of the harbour. The berthing facility is 365 metres in length, 65 metres in width and a draft of 10.3 metres.

General Manager of Antigua Cruise Port, Dona Regis-Prosper, recalled the challenges her company encountered in constructing the fifth pier at the height of the COVID-19 Pandemic, but they persevered and now there are numerous benefits to be derived from the docking facility.

“By the end of this season, we will be welcoming over 600,000 passengers and in the summer months, we are expecting 30,000 plus passengers.

Our partnership with the government of Antigua will continue as our investments in upland projects and Heritage Quay upgrades continue,” Regis-Prosper affirmed.