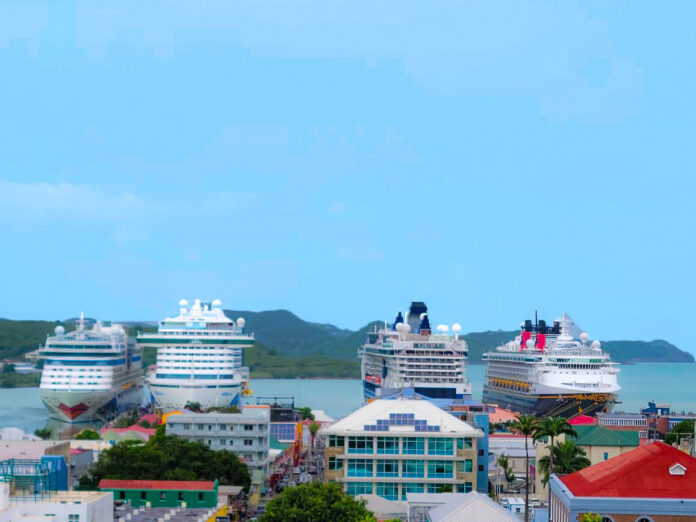 POINTE XPRESS: Work on the fifth berth is close to completion as Cabinet has announced a prospective timeline for its opening ceremony.

This ceremony is expected to coincide with the country’s hosting of the OECS Ministers of Tourism meeting from 1st to 3rd December.

The latest Cabinet notes suggested that the fifth berth would be launched at this time to celebrate “the enormous effort to ensure that Antigua can accommodate the Oasis Class Ships”.

The berth itself was completed last February, but the official opening has been delayed several times due to the dredging at the harbour which will allow the country to accommodate Oasis Class ships.

On Thursday, however, Information Minister Melford Nicholas said while the dredging completed is still insufficient to accommodate Oasis Class ships, the harbour can now welcome much larger vessels than the country has before.

“The dredging of the harbour is nearing completion. There are a couple of events that will take place. The christening of the new berth, as it were, we will be able to have that event but early in the new year in January.

“There will be a larger than previously received craft that will come here and it would not have been able to travel here if not the channel been open but it is still not at the stage were we will be able to accommodate the Oasis Class ships.

“I think that the work is nearly 90 percent complete and the good news is Blue Ocean which is the dredging company has indicated that they are encountering softer material so hopefully it translates into an accelerated timeline at which the work can be done…and we anticipate that very early on in the new year the work will be completed and at some point, in time, the maiden voyage of the Oasis Class ships will be able to accommodate it here in Antigua,” Nicholas clarified.

This is welcome news for those within the cruise tourism sector in Antigua and Barbuda as Oasis Class ships will significantly boost the recovering economy.

The Royal Caribbean-owned ships are the largest in the world and can carry more than 6000 passengers and crew.

This staggering figure is exceedingly attractive to countries like Antigua and Barbuda which depend on tourism.

The new pier is part of a US$80 million agreement signed in 2019 between Global Ports Holding (GPH) and the government to redevelop the cruise complex.

The completed port project will also see new shopping and restaurant facilities as well as 50,000 square feet of additional commercial space which will be available for lease.