It was a wheel of misfortune.

The 400-foot-tall Ferris wheel at Orlando, Florida’s ICON Park lost power Saturday — leaving 62 riders suspended in midair at the embattled amusement destination where a teen died after plummeting off a ride earlier this year.

“The Wheel lost power Saturday night and we’re working with the Orange County Fire Department to safely evacuate guests,” according to a statement issued from the park.

“The Wheel is expected to be closed for the next few days,” a spokesperson for the park told The Post.

“The technical team is conducting maintenance on the Wheel and, as per our protocols, the attraction will be reviewed by Florida state ride inspectors prior to reopening,” the ICON rep added. “Updates on opening will be provided on our website and social.”

According to one stunned non-joy-rider, there appeared to be a fire of some sort at the base of the ride. “We look down and there were flames and sparks and smoke coming. I guess the generator blew or something,” parkgoer Robin Baker told WESH 2.

First responders had to manually turn the wheel so 80 firefighters could attempt to rescue all the occupants, Orange County Fire Department public information officer Ashley Gipson told Fox News. The ordeal took three hours and reportedly had ride passengers on the edges of their seats.

The Orange County Fire Department later confirmed that none of the passengers were injured. However, videos on Twitter appeared to support the online speculation that one of the ride’s generators blew, resulting in the wheel being stopped.

ICON Park has been under scrutiny since a 14-year-old boy — identified as Tyre Samson — plummeted to his death off the facility’s Free-Fall attraction in March of last year.

Disturbing footage of the incident shared on social media showed Samson plunging from the Free-Fall ride at ICON Park about halfway down its 400-foot descent.

Horrified witnesses and other riders began screaming after the ride came to a rest as the tragic teen lay motionless just feet away from them. “Oh my God!” screamed one woman. “Oh my God! He just fell! Oh my God!”

One frenzied woman could be seen in the footage asking staffers if they had secured Samson’s safety harness before the ride.

“Are you sure you checked him?” she asked repeatedly.

The Free-Fall opened in December 2021 and is hyped as the country’s tallest free-standing drop tower. The ride stands 430 feet tall and can hold up to 30 people.

The ride spins around a gigantic tower after it reaches peak level in the air. Riders are positioned forward with their faces at the ground before dropping at 75 miles per hour.

An investigation is reportedly ongoing.

“We can’t imagine the pain and anguish that his family must be going through,” Orange County Sheriff John Mina said during a press conference at the time.

In 2020, a worker died while performing maintenance on a different attraction at ICON Park. Jacob Kaminsky fell about 60 feet to his death, according to the Orlando Sentinel. He was 21 years old. 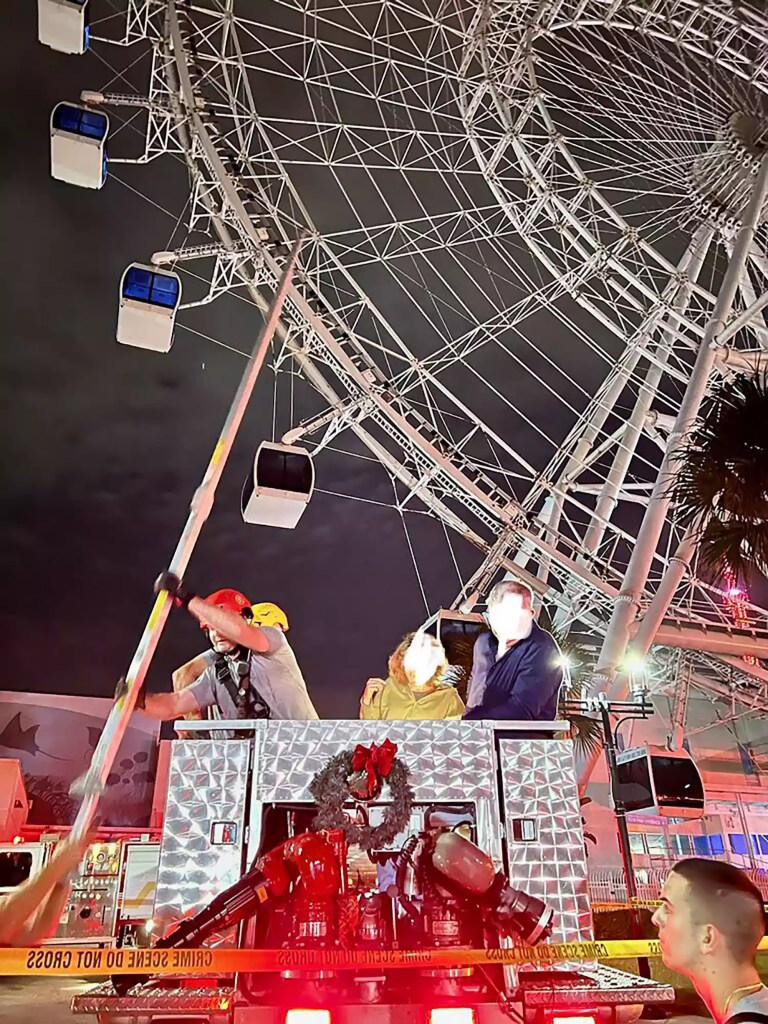