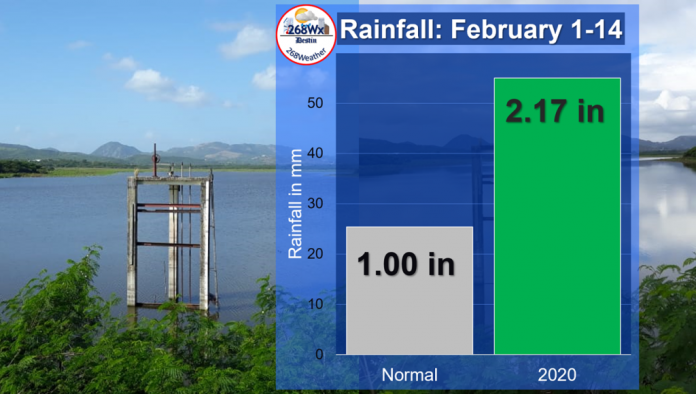 According to meteorologist Dale Destin, this February is on track to becoming one of the wettest on record for Antigua. Thus far, it is the wettest February, at the V. C. Bird International Airport (VCBIA) since 2005 and the wettest for Antigua since 2004.

There is no daily breakdown of the island-average rainfall; however, based on the fact that the current island-average total of 59.9 mm (2.36 in) is already the most since 2004, and the average for the month is 55.9 mm (2.20 in), it is highly likely that the rainfall for the first two weeks of February was also well above normal for the island.

The cause of our wetter than usual February weather is the positive North Atlantic Oscillation (NAO) index. The NAO is a large-scale seesaw in atmospheric pressure between the subtropical (Atlantic) high and the polar low.

The positive NAO index occurs when the subtropical high is higher (stronger) than usual and the polar low is deeper (lower) than usual. When this happens, it causes the winds across the area to be higher than usual (fresh to strong), which in turn destabilises the lower atmosphere by way of mixing and convergence – resulting in above normal rainfall for Antigua and likely other nearby islands.

A positive NAO index also has implications for other places. For example, the United Kingdom, Ireland and northern Europe get more and stronger winter storms when the NAO index is positive, which have been happening. Thus far, there have been four named winter storms to significantly impact the area, the last being Storm Dennis.

The NAO index is forecast to remain above normal; hence, wetter than usual conditions are expected to continue. Unfortunately, the NAO index is not predictable beyond two weeks; thus, only short-range forecasting can be done using it as a predictor. Also, for some other months, a positive index is associated with below normal rainfall.

The average rainfall totals for February for the VCBIA and Antigua are 44.9 mm (1.77 in) and 55.9 mm (2.20 in) respectively. This February could be among the top three wettest on record.