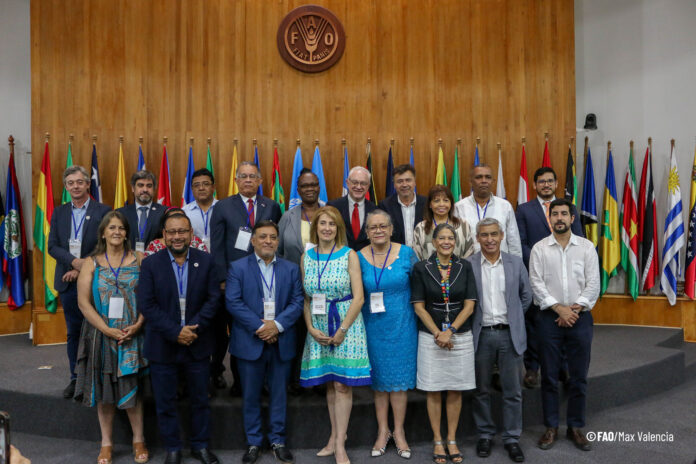 During the meetings of the Second Conference on Family Farming of the Enlarged MERCOSUR and the Latin American and Caribbean Meeting of the United Nations Decade of Family Farming, more than 200 participants agreed to work together to make progress in improving the rural world.

Santiago de Chile, December 7 – In the presence of 10 ministers and deputy ministers, representatives of 24 countries, and 200 delegates, the Food and Agriculture Organization of the United Nations (FAO), together with MERCOSUR,

the Central American Integration System (SICA), government authorities and platforms of family farming organizations, held dialogues on the progress of the plans and policies of the United Nations Decade of Family Farming.

The event was held at the FAO Office for Latin America and the Caribbean headquarters in Santiago.

Representatives of governments, multilateral bodies, and regional rural organizations committed themselves to developing and implement public policy agendas aimed at empowering family farmers because of their key role in eradicating hunger and poverty and mitigating the effects of climate change.

Participants highlighted the need to strengthen family farming by increasing investment and budgets to build new rural development governance in Latin America and the Caribbean.

Participants also emphasized that it is essential to direct more investments to family farming to combat inequality in the territories and provide society with healthy and nutritious food produced more sustainably.

The events were attended by Mario Lubetkin, FAO Regional Representative for Latin America and the Caribbean, Ministers from Bolivia, Belize, Chile, Costa Rica, and Panama government representatives from Uruguay,

and members of the Executive Secretariat of the Agricultural Council of the Central American Integration System, the Institute for Agricultural Development of Chile; and representatives of the organizations CLOC /Vía Campesina, COPROFAM and the Regional Rural Dialogue Program.

Lubetkin added: “collaborative work is required to change this situation, and this must be led by the countries, through their institutions, to advance their priorities.”

He also reaffirmed the willingness to “continue working with governments and all actors in the region, civil society, and academia, with our technical capabilities to facilitate initiatives that strengthen the bonds of integration and solidarity.

I reiterate: this is your home”.

“We must recognize this meeting as an exceptional opportunity to generate agreements that facilitate dialogue and the design of differentiated policies for Family Farming and highlight its role in the transformation of agrifood systems,” added Lubetkin.

The Minister of Agriculture of Chile, Esteban Valenzuela, addressed the event, thanked FAO for providing the space for the event, and thanked his country’s family farmers: “in Chile, there has been no lack of production by you, men and women.”

The Minister of Agriculture, Food Security and Enterprise of Belize, José Abelardo Mai of Belize, spoke along the same lines, stating that “if it were not for the resilience of these producers, our economy would have contracted much more than it did, which was 14% by 2020”.

He also thanked FAO “for consistently supporting the efforts of my ministry to maintain food security and thus support the most vulnerable people.”

The Minister of Rural Development and Lands of the Plurinational State of Bolivia, Remmy Gonzáles, said that his country would insist on supporting national agricultural research systems to consolidate and expand family farmers’ access to markets and strengthen the economies of rural communities.

Later, Víctor Carvajal, Minister of Agriculture and Livestock of Costa Rica, stressed that “today’s markets demand not only quality food but also sustainable production with a low chemical load.”

He considered it essential to “generate support for family agriculture so that consumers do not go elsewhere.

He stressed the need for governments to make rapid progress in modernizing family-based rural production.

The Minister of Agricultural Development of Panama, Augusto Valderrama, explained how his country had taken steps to promote the sector.

“The initial action was the definition and approval of a legal framework to ensure the strengthening of the food production sector and the design of a policy to guarantee a sustainable and sustainable agricultural sector,” he said.

María Fernanda Maldonado, Director General of the Secretariat of the Ministry of Livestock, Agriculture, and Fisheries of Uruguay and Pro-tempore Chair of REAF/MERCOSUR, stressed that family farming and small-scale fishing are key players in food security, fighting against poverty, and the transformation of agrifood systems.

The Vice Minister of Rural Development of the Dominican Republic, Miriam Estela Guzmán de Tejada, as President Pro-tempore of the Central American Agricultural Council, stressed that “for Family Farming to be sustainable, it must be profitable, associated, researched and financed.