A Belmont family is contemplating legal action after accusing the police of rampaging through their home, assaulting them, and even threating to kill a family member.

The terrifying ordeal reportedly happened after 10 p.m last night when Sharon Williams was getting ready for her bath.

She told Antigua News Room that she noticed a male figure with a bright light trying to enter her house and tried to prevent him.

Williams says the man later identified himself as a police officer along with several others.

She said the lawmen had no warrant but she agreed for one of them to conduct a search because of her familiarity with him.

The officer rampaged through the Belmont home and told the owner that they are in search of her son “June June” who is known to the police.

While searching her home the woman said the officers accused her of lying to them about the whereabouts of her son, called her the worst names imaginable and threatened to kill her son who she says left the home moments earlier.

All this was allegedly done in the presence of the woman’s three daughters none older than 14-years-old.

Williams says police officers also destructed her property by damaging security cameras which had been installed outside her home for security purposes.

A report was made to the police but the woman said the high-ranking police officer she spoke to, did not have time to hear her of her plight.

“Them ah come for arwe like we are robbers and thief. We the mothers ain’t crying we are praying because we are tired of this now,” Williams cried.

This is the fourth occasion that Williams says police entered her home in such a manner.

Over 50 heavily armed police officers were reportedly on the woman’s street stopping various individuals and vehicles in search of “June June.”

It was during that operation that lawmen recognized two of the “wanted” man’s relatives.

June June’s 19-year-old uncle told ANR that the police officer identified him by face, accosted him and asked him where his nephew was.

When he said he did not know, the officer allegedly struck him across the face bursting his lips in the process.

But the man’s ordeal was not over as officers detained him and his cousin. When they arrived at the Police Headquarters, the man says the police brutalized him, inflicting several punches about the body.

He alleges that the police officer then tried to pin a fire arm on him.

“And the man take out a gun from down ya so (his leg strap) and ah force em in me hand.”

The man said he held the gun after the policeman elbowed in several times in his rib cage.

The teenager says the officers took the gun once they forced it in his hands and wrapped it with a cloth.

The police officer allegedly threatened to stab the teen and to take him to Devil’s Bridge to throw blocks on him.

The two boys were not arrested or charged.

Their mother wants to know “wa mek them knock me pickney.”

“And this gun they put on he had that one serious serious something,” the woman said.

The family says they will seek to take legal action against the police.

When contacted Deputy Commissioner of Police Joseph Hughes says he met with the family briefly on Thursday but had to cut their interview short due to an important engagement.

He says he wants the full story before taking the matter further.

Lawmen are on a hunt for criminals who are jeopradising the safety of residents, especially in the last few weeks.

ANR understands that June June is being sought by police in connection with the Golden Grove chase which resulted in a crash. 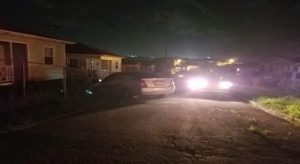