The community of All Saints was in shock that tragedy had reached their doorstep today as word spread of the apparent suicide of a 12 year old boy.

Jahquez Lanier of the McPond area was dicovered by a family member Friday hanging with his school tie around his neck according to reports.

Lanier lived with his gandmother Jane Pereira. After not hearing from her grandson for a long while, sources said Pereira sent a relative to check on the young man who was discovered hanging by the neck in the washroom.

Attempts to revive the Seventh Day Adventist student were unsuccessful and he was soon pronounced dead by a doctor.

Family members and visitors arrived on the scene and many had to be consoled as the body was taken away by the hearse. 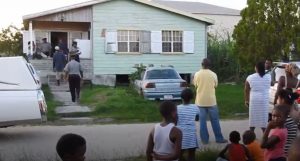 Senator Colin James the ABLP caretaker for the area and a family friend was on the scene in the aftermath of the tragedy.

He said the death has left him dumfounded.

“My deepest and sincerest condolences to the family. His grandmother is like a mother to me and to try to put myself through what she is going through is heart wrenching,” Senator James said.

The death is reminiscient of another in October where an 18-year-old young woman was found dead with an electrical cord around her neck in the Jennings Extension community.