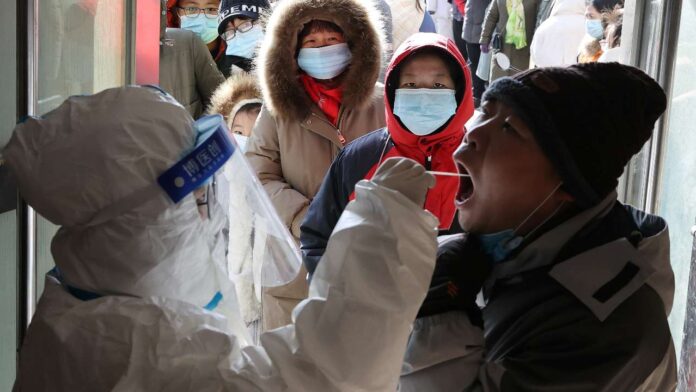 Facing a surge in COVID-19 cases, China is setting up more intensive care facilities and trying to strengthen hospitals as Beijing rolls back anti-virus controls that confined millions of people to their homes, crushed economic growth and set off protests.

But the latest moves suggest the ruling Communist Party will tolerate more cases without quarantines or shutting down travel or businesses as it winds down its “zero-COVID” strategy.

A Cabinet meeting called Thursday for “full mobilisation” of hospitals including adding staff to ensure their “combat effectiveness” and increasing drug supplies, according to state media.

Officials were told to keep track of the health of everyone in their area aged 65 and older.

It isn’t clear how much infection numbers have increased since Beijing last week ended mandatory testing as often as once a day in many areas. But interviews and social media accounts say there are outbreaks in businesses and schools across the country.

Some restaurants and other businesses have closed because too many employees are sick.

The virus testing site in Beijing’s Runfeng Shuishang neighbourhood shut down because all its employees were infected, the neighbourhood government said Saturday on its social media account. “Please be patient,” it said.

Official case numbers are falling, but those no longer cover large parts of the population after mandatory testing ended Wednesday in many areas.

That was part of dramatic changes that confirmed Beijing was trying gradually to join the United States and other governments that ended travel and other restrictions and are trying to live with the virus.

On Sunday, the government reported 10,815 new cases, including 8,477 without symptoms. That was barely one-quarter of the previous week’s daily peak above 40,000 but only represents people who are tested after being admitted to hospitals or for jobs in schools and other higher-risk sites.

Shaanxi province in the west has set aside 22,000 hospital beds for COVID-19 and is ready to increase its intensive care capacity 20 per cent by converting other beds, the Shanghai news outlet The Paper reported, citing Yun Chunfu, an official of the provincial health commission.

Yun said cities are “accelerating the upgrading” of hospitals for “critically ill patients.”

“Each city is required to designate a hospital with strong comprehensive strength and high treatment level” for COVID-19 cases, Yu was cited as saying at a news conference.

China has 138,000 intensive care beds, the general director of Bureau of Medical Administration of the National Health Commission, Jiao Yahui, said at a news conference Friday. That is less than one for every 10,000 people.

Health resources are distributed unevenly. Hospital beds are concentrated in Beijing, Shanghai and other cities on the prosperous east coast. Thursday’s Cabinet statement told officials to make sure rural areas have “fair access” to treatment and drugs.

China’s controls kept its infection rate low but crushed already weak economic growth and prompted complaints about the rising human cost. The official death toll is 5,235, compared with 1.1 million for the United States.

China’s official total case count of 363,072 is up nearly 50 per cent from the October 1 level after a rash of outbreaks across the country.

Protests erupted November 25 after 10 people died in a fire in Urumqi in the northwest. Internet users asked whether firefighters or people trying to escape were blocked by locked doors or other anti-virus measures. Authorities denied that, but the disaster became a focus for public anger.

Xi’s government promised to reduce the cost and disruption after the economy shrank by 2.6 per cent from the previous quarter in the three months ending in June. That was after Shanghai and other industrial centers shut down for up to two months to fight outbreaks.

Forecasters say the economy probably is shrinking in the current quarter. Imports tumbled 10.9% from a year ago in November in a sign of weak demand. Some forecasters have cut their outlook for annual growth to below three per cent, less than half of last year’s robust 8.1% expansion.

It isn’t clear whether any of the changes were a response to the protests.

In a show of official confidence, the number two leader, Premier Li Keqiang, was shown by state media meeting with leaders of the International Monetary Fund and other financial institutions without masks last week in the eastern city of Huangshan.

Earlier, Xi skipped a photo-taking session with Russian and Central Asian leaders during a summit in Uzbekistan in September at which the others wore no masks.

Still, health experts and economists say “zero COVID” is likely to stay in place at least through mid-2023 because millions of elderly people need to be vaccinated before restrictions that keep most visitors out of China be lifted.

The government launched a campaign last week to vaccinate the elderly, a process that might take months.

Experts warn there still is a chance the ruling party might reverse course and reimpose restrictions if it worries hospitals might be overwhelmed.

Meanwhile, experts cited by state media called on the public to reduce the strain on hospitals by treating mild COVID-19 cases at home and putting off treatment for less serious problems.

Patients are standing in line for up to six hours to get into fever clinics. Accounts on social media say some hospitals turn away patients with problems deemed not serious enough to need urgent treatment.

“Blindly going to the hospital” is depleting resources and might delay treatment for serious cases, “resulting in serious risk,” the vice president of Ruijin Hospital in Shanghai, Chen Erzhen, told The Paper.