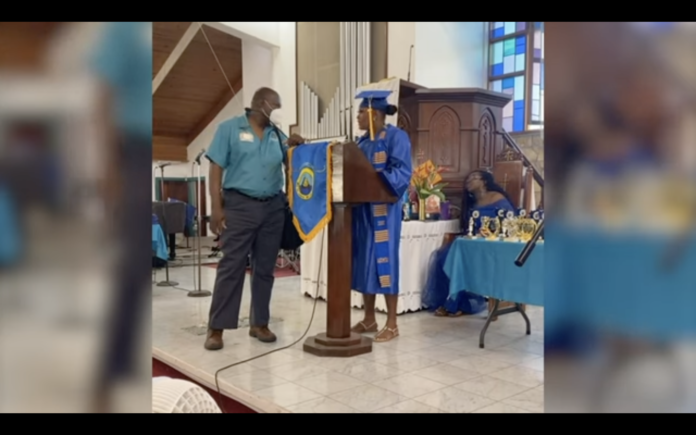 The Antigua Girls High School graduation was interrupted on the morning, June 28, when Ministry of Health personnel halted the ceremony, reportedly because of the number of people in the building.

A parent tells REAL News that Health officials were concerned that the audience inside the Spring Gardens Moravian Church was too large, sparking fears of transmission of the COVID-19 virus.

He says the proceedings were held up for about 15 minutes while the matter was sorted out, and the graduation exercises were allowed to continue.

A woman tells REAL News that while the guest speaker, Dr. Adama Francis, was being introduced by a student, one of three Health officials went to the podium, causing the proceedings to be halted.

However, she says, it appeared that the school’s principal made a quick appeal to Governor-General Sir Rodney Williams – who, along with the Minister and Director of Education, was seated up front, and Sir Rodney’s aide-de-camp then spoke to the Health official, who left the stage.

The woman – whose daughter was among the graduating class – says “there was no drama,” but persons who were not wearing their masks were then asked to do so.

Following the ceremony, she says, there was some grumbling among parents, who said they hope the Ministry of Health is being as vigilant at the scores of pre-Carnival fetes being held every weekend.

While it is not known just how many people were in the church, the woman says the audience had been limited by the school, with the graduates allowed only three guests each.