For more than 200 years, sailboats and fishing boats have unknowingly passed over the site of a presumed historic shipwreck off the southern coast of the island of Antigua. 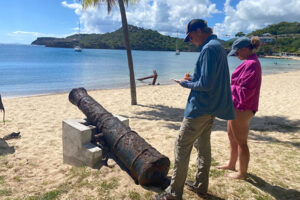 This fall, Lynn Harris, an ECU professor of history who specializes in African and Caribbean maritime history and archaeology, was invited to partner on the research project.

Led by Harris, graduate students and faculty and staff from the Thomas Harriot College of Arts and Sciences Department of History and program in maritime studies spent 15 days in October investigating the submerged vessel, currently referred to as the Tank Bay shipwreck.

Jeremy Borelli, maritime research associate in charge of equipment and logistics; Ryan Bradley, diving and water safety officer; and 10 graduate students in the maritime studies graduate program who participated through their field school in maritime history and underwater archaeology course.

“The ECU MA program in maritime studies is one of a handful in the world that trains students in underwater archaeology and provides unique opportunities for them to participate in exciting projects such as this one,” Harris said.

“This project is at a formative stage where the team is attempting to confirm the identity of the Tank Bay shipwreck with high potential to be an 18th-century French trade warship.”

“Having the opportunity to get hands-on experience within an area with such diverse and significant cultural heritage has been a chance of a lifetime,” said Levi Holton, one of the maritime studies graduate students who participated in the field school experience.

During their fieldwork, students performed underwater mapping of a historic quay in the dockyard and documented historic cannons, anchors and other fortifications at risk on the hilltops surrounding the harbor.

In addition to historic structure research, the team gathered baseline data (using photography, LIDAR and 3-D modeling) on erosion on the coastal heritage sites and on submerged seabed areas below the fortifications where historic artifacts and old anchorage mooring chains lay.

“When my eyes met the shipwreck resting in Tank Bay for the first time, I instantly got butterflies in my stomach,” said Logan Willis, another maritime studies major and research participant.

“It was the first time that I had ever seen a wooden shipwreck with such historical significance.

“Finally, everything made sense. Everything that my professors had been teaching, everything I had read and researched for two years, it all came together,” she said.

“Attending the field school in Antigua definitely broadened my understanding of ship construction and the importance of learning outside the classroom.”

Harris said all the cultural sites the team researched fall within the boundaries of the Naval Dockyard UNESCO World Heritage Site and are at risk for erosion and inundation from anticipated climate and coastal changes.

“This real-world experience was conducted at such a critical time when sea level rise is threatening the sites,” Holton said.

“The knowledge that our efforts have contributed to building the archaeological and historical record for these critical sites adds value to our work, and it will be used in the not-so-distant future to tell the whole story of Antigua and its people.”

During the 15 days of research, the team recovered pipes, ceramic, glass, fishing weights, musket balls and strips of sheathing from the Tank Bay wreck, and students set up exhibits of the recovered artifacts for political dignitaries, including the governor-general of Antigua and Barbuda and naval dockyard donors.

In addition, students also worked with a variety of community groups and offered UNESCO UNITWIN underwater archaeology capacity-building workshops in the evenings or as part of daily rotations.

“Apart from further evidence to confirm the identity of the ship, each artifact has a potential story about manufacturing, distribution, trade, warfare and daily life on the ship,” Harris said.

“The next tantalizing step is the challenge of using both the historical and archaeological record to enrich and explain the story of this international heritage site.”

Harris said the shipwreck has an illustrious global biography. The wreck is believed to be the 900-ton vessel Beaumont, built in 1762 for French East Indies Company trade in the Indian Ocean.

When the company dissolved in 1769, the ship was deployed into French naval service as a fourth-rate-ship-of the line. In 1772, it left naval service and was purchased by a private citizen, Dessaudrais Sebire and Co., who renamed it Lyon, commanded by Capt. Jean Michel, who carried out trade that supported the rebel patriots during the American War of Independence.

A British ship HMS Maidstone, under the command of Capt. Alan Gardener, captured Lyon off the Virginia coast and took it to Antigua as a prize in 1778. A 1780 map shows the outline of a ship titled Lyon in English Harbor at the current location of the wreck.

During the investigation, the ECU team worked closely with other expedition collaborators, including the University of the French West Indies, the Antigua and Barbuda National Parks — supported by Antigua & Barbuda Search and Rescue — and the American Association of Port Authorities.

Further investigation of the artifacts will take place over the next few months; ECU’s team will co-author a report based on its analysis.

“We are planning a virtual conference later this semester to present our findings along with our Antigua and French West Indies partners,” Harris said.

“We hope to continue this productive and exciting research collaboration for future field schools and to seek grants to further our research capabilities.”