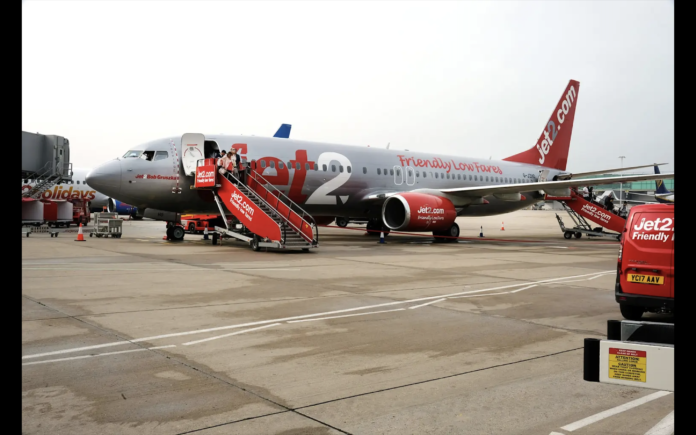 NY POST: Video has emerged showing a drunken passenger being hauled off a plane by Greek police after urinating on his brother and provoking a mid-flight fistfight.

The stomach-churning disruption took place aboard a Jet2 flight from London to the island of Crete back in early May, but a cellphone recording capturing the aftermath of the brothers’ brawl only emerged on TikTok Wednesday.

In the brief footage, police officers are seen marching a man down the aisle towards the exit. The passenger, whose face is not seen in the video, is wearing a white tank top pulled up to his chest, exposing his back.

Jet2, a British low-cost airline, issued a statement last month revealing that passengers Alfie and Kenneth Springthorpe, from Southeast London, were slapped with a fine of nearly $63,000 and a lifetime ban for their “aggressive and violent behavior,” which resulted in the flight being diverted and delayed nearly four hours.

A passenger, who wished to remain anonymous, said the cabin crew found one empty bottle of Ciroc Vodka, and a second bottle that was half-empty, under the brothers’ seats, the Mirror reported.

The Jet2 customer who recorded the video and shared it on TikTok Wednesday wrote: “Jet2 flight fight after one drunken brother pisses on the other cos he’s too drunk to walk to toilets.”

According to the eyewitness, before the flight took off from London Stansted Airport on May 3, a flight attendant informed the cabin crew that she had given a first warning to one of the Springthorpe brothers “due to his inappropriateness about her lips,” he said.

“About two and a half hours into the flight I was waiting to go to the toilet and the older brother stood up but was so drunk he couldn’t stand, he needed the loo but in his drunken state peed over the younger brother who then hit him resulting in a full fist fight,” the unnamed traveler reported.

The passenger added that a woman who was sitting in a seat in front of the feuding brothers with her baby got hit in the melee, before the Springthorpes were finally separated.

“The cabin crew called for male passengers to come and assist by sitting around them,” the witness revealed.

Alfie and Kenneth continued yelling obscenities at one another, and the flight was ultimately diverted to the Greek island of Corfu so that the local police could remove them from the plane.

According to the witness, the older brother was handcuffed and dragged off the aircraft because he refused to leave and could not stand on his own.

“The younger brother just kept saying ‘he p—ed on me. What I was supposed to do’ and was quite upset and apologetic,” the passenger recounted.