The middle portion of Valley Church is now without power and will remain so for the next several hours.

The Supervisor of the Electrical Department at APUA, Whitney Flemming told Antigua News Room that the outage was caused by a vehicle which ran off the road.

The silver car was reportedly driving at a high speed when the driver lost control and slammed into an electrical pole. 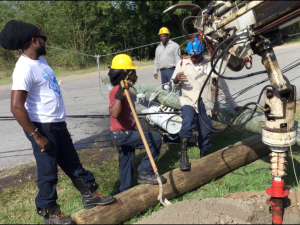 Further investigation indicate that the driver was an unlicenced teenager.

The incident occured around after six this morning.

ANR will provide the public with more details as they become available.