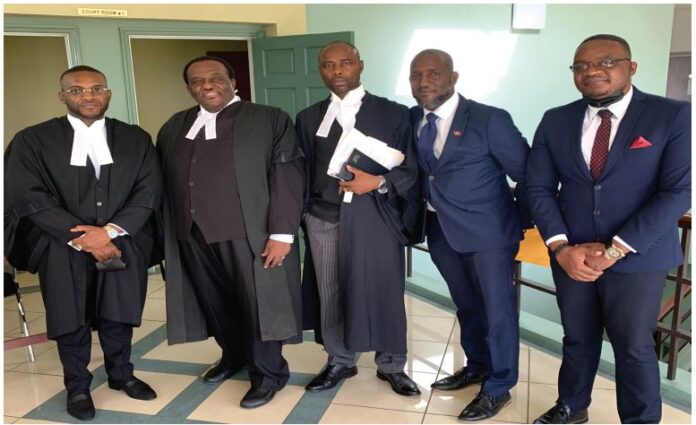 POINTE XPRESS: Antigua and Barbuda’s newest member of the legal profession, Kevon Benjamin, was admitted to the bar at a colourful ceremony held at the High Court on Thursday before Justice Iain Morley, QC.

The event, usually a proud moment for the new lawyer and family, took on special significance as it marked forty years to the day of the call to the bar of his father, Attorney General, Steadroy ‘Cutie’ Benjamin.

The senior Benjamin was called to the bar on 14th January, 1981, and he was gushing with pride when he addressed the court to second the application of Kevon Benjamin.

“This is the proudest moment of my life; my son’s application was co-sponsored by his brother Damien Benjamin (along with Lawrence Daniel) and seconded by me. It is a confirmation of all I have worked for as it now means that upon leaving office, my sons and I would be able to practice from our own law firm,” a clearly emotional Benjamin stated. The Attorney General has urged his sons to adhere closely to the principles of the legal profession, and code of ethics.

“There’s nothing better than honesty, commitment and a deep sense of caring for the other man. By doing the best we can, I know that we can help make Antigua and Barbuda and safer, better place for all of us,” he remarked. In his remarks, Kevon Benjamin also expressed delight in being called to the bar on the 40th anniversary of his father’s formal entry into the legal profession.

“I am honoured to be called to the bar exactly 40 years after you were called on the 14th January, 1981. It is easy to understand why January 14th is now my favorite day of the year. Without you dad, I would not have made it through law school, period. It is because of you that I am strong enough and prepared to walk into my God ordained purpose. Dad is the most determined and principled person I know. His attention to detail is extraordinary and the diligence he displays is noteworthy; he truly loves the law and applies its principles in his everyday life,” Kevon stated.

He said he was happy to join “this honourable profession” and he gave a firm commitment to live by its ethics.

“I will not lose sight of the profession’s uncompromising virtues and traditions. I am well aware that the profession can be a rewarding one. However, it comes with its challenges and when I take the pledge, I vow to deliver legal services to the standard of a reasonable, competent attorney-at-law who practices in Antigua and Barbuda,” he declared.

Justice Morley inquired whether young Benjamin had a desire to practice criminal law. He advised the ‘newly-minted’ lawyer that while the money is made ‘sitting behind a desk,’ that it was in criminal law that lawyers develop their skills. — PointeXpress