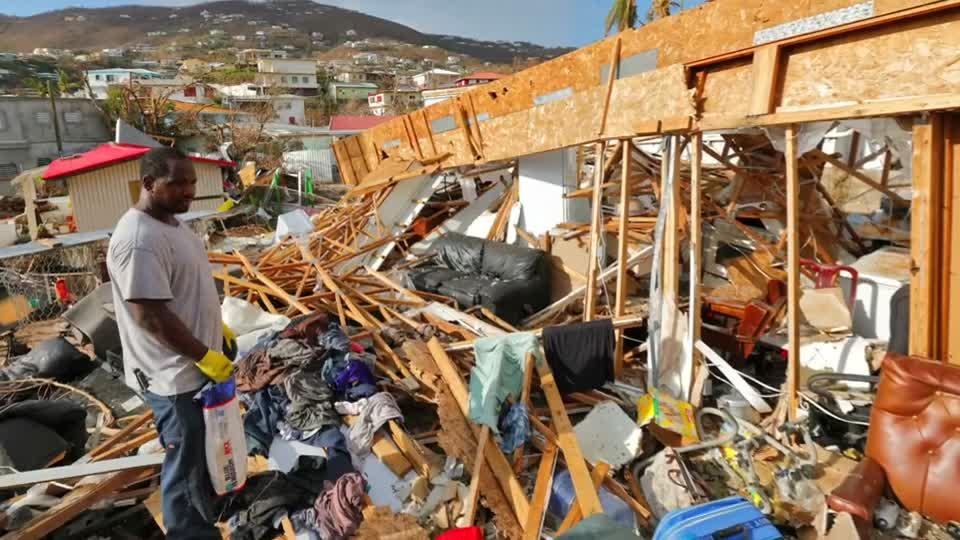 By Brenton Henry
Gwyneth Laudat, 67, left her job as a farmer nearly two decades ago and like many women at the time found a job as a security guard.
She remembers the day she packed her last banana box as subsidies to the United Kingdom market ended.
“I had no choice,” Gwyneth said. Her children were away at college at the time and she had to make the hard decision in order to ensure the completion of their degrees.
“Banana did not have money at the time, and pest and disease were killing the citrus. It was too much work for little money and I had no help.”
Gwyneth left hundreds of acres in the village of Warner in the interior of Dominica to work as a security guard at a primary school near the capital Roseau.  But Gwyneth was forced back on her farm in recent weeks after Hurricane Maria devastated Dominica on September 6, 2017.
She is not alone, many Dominicans, uncertain of their jobs and how to provide for their families have gone back to the soil.
The Food and Agriculture Organization (FAO) reports that Hurricane Maria has totally decimated Dominica’s agricultural sector directly impacting income, food and nutrition security of a large percentage of the island’s population.
Agriculture not only employs 25 per cent of Dominica’s work force; over the past five years, the sector contributed on average 15 per cent of the country’s Gross Domestic Product (GDP).

Many residents have already benefited from the agriculture revitalisation which begun in Dominica following the passage of hurricane Maria last month. The OECS Commission has partnered with the Food and Agriculture Organization of the United Nations (FAO), the Caribbean Agricultural Research and Development Institute (CARDI) and an agricultural consultant, Peter Dillon, to establish a seedlings project.

Over 100,000 fast growing seeds were recently planted and the first harvest is expected in four weeks.

Hurricane Maria has left the landscape in Dominica, the “nature island,” desolate and the need for replanting is apparent and urgent. Self-sufficiency is now a priority to speed up the recovery process as the country currently depends on shipments of food relief from regional and international stakeholders.

Fast growing food crops were identified as the priority seeds: tomatoes, eggplants, pumpkins, sweet potatoes, spinach, lettuce, cabbage and kale. On one hand, the operations consisted in supporting individual farmers and households through the distribution of seeds.

On the other hand, three major sites have been identified as strategic areas for replanting interventions: Roseau, Londonderry and Portsmouth. The Portsmouth community, located in the south of the island, is particularly important as it enables the food supply of the hospital.

“This week we worked in Roseau and in Portsmouth where we planted a total of 150,000 seeds. We also ensured the rehabilitation of four greenhouses. The interventions went much better than I thought. We are expecting the first harvest in four weeks!” Dillon confirmed with enthusiasm.

Gwyneth says she is not happy having lost all her physical possessions.

“But I am happy to be back on the farm. We have to find ways to provide for ourselves.”