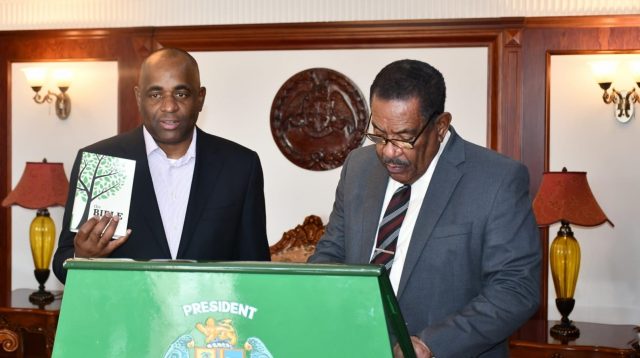 Thirteen ministers, three ministers of state and two parliamentary secretaries took their oaths of service, allegiance and secrecy on Tuesday when the cabinet of the new Dominica Labour Party (DLP), led by Prime Minister Roosevelt, was sworn in at a grand ceremony at Windsor Park Sports Stadium.

The prime minister had already, earlier in the day, been appointed as Minister for Finance, Resilience, Economic Affairs, Investment, Planning, Sustainable Development, Telecommunications and Broadcasting.

The ministerial appointments are:

I . Senior Minister and Minister of Housing and Urban Development Hon. Reginald Austrie

Two senators are among the three ministers of state who have been appointed. They include Minister of State in the Office of the Prime Minister, with responsibility for Telecommunications and Broadcasting which has been filled by newly appointed Senator, Hon. Oscar George, of Penville in the prime minister’s constituency and Minister of State in the Ministry of Finance, Economic Affairs and Planning held by Senator Hon. Gregory “Karessah” Riviere who contested the December 6 general election for the DLP in Marigot and lost.

The position of Minister of State in the Ministry of Foreign Affairs, International Business and Diaspora Relations, with Specific responsibility for Diaspora Relations has been assigned to Hon. Edward Registe.

The appointment of three parliamentary secretaries rounds off the new 18-member DLP cabinet. They are:

Parliamentary Secretary in the Ministry of Tourism, International Transport, and Maritime Initiatives, with special responsibility for Air and Sea Port Operations, Hon. Chekira Lockhart-Hypolite and Parliamentary Secretary in the Ministry Of Health, Wellness and New Health Investment, with particular responsibility for Community and Home Care, Hon. Kent Edwards