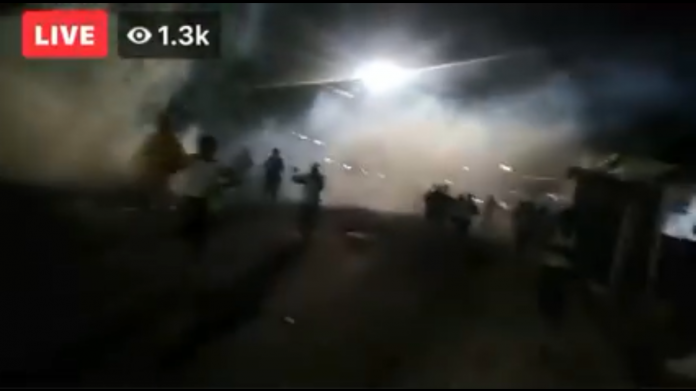 Police fired teargas to disperse protestors, who had gathered outside the residence of President Charles Savarin, demanding electoral reform, ahead of the December 6 general election.

Police have erected barriers, leading to the residence, and some of the protesters, including at least one opposition legislator, Danny Lugay, say they will not leave the area until they meet with President Savarin.

“We have to meet with our President. He was elected by both sides,” one protester shouted, while another said, “we, the people, have decided we want electoral reform and electoral reform we will get”.

The protesters were descending on the residence of the President, after attending a public meeting on the outskirts of the capital, where the issue of electoral reform had been discussed.

Lugay said that it was important for there to be electoral reform before the next general election, scheduled for December 6, saying that “even in Haiti, people have identification cards”.

Nomination Day for the general elections will be tomorrow.

Earlier, Police Commissioner, Daniel Carbon, appealed for peace and calm, as he reported that acts of violence had been reported to law enforcement authorities.

“General election day is on the sixth of December 2019, and tomorrow is Nomination Day. Dominica is a democracy and general elections must be conducted in an atmosphere of peace and tranquillity.

The ruling Dominica Labour Party (DLP), headed by Prime Minister, Roosevelt Skerrit, is seeking a fifth consecutive term in office. It will be challenged by the main opposition, United Workers Party (UWP), led by Opposition leader, Lennox Linton. The other opposition party, the Dominica Freedom Party (DFP), has said it would not be contesting the polls, but would lend support to the UWP.

In the 2014 general election, the DLP won 15 of the 21 seats in the Parliament, with the remainder going to the UWP.