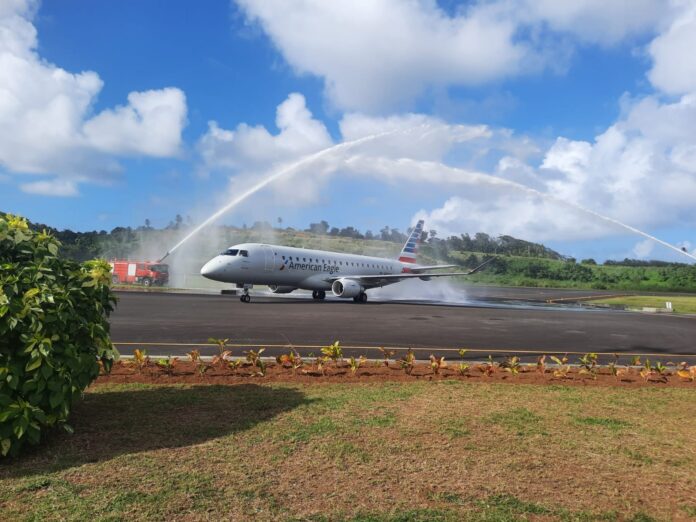 On December 8, Dominica, one of the Caribbean’s most exclusive tourist destinations, will welcome its first direct non-stop flight from the Miami International Airport (MIA).

An American Airlines Embraer aircraft carrying 69 eager travellers will touchdown at the Douglas Charles Airport on the island’s northeast coast at approximately 3:21 pm. The turnaround flight will depart just an hour later for Miami.

The flights will be operated twice weekly on Wednesdays and Saturdays, with an expansion to three times a week slated to begin in January, 2022.

For Dominica’s director of tourism, Colin Piper, this inaugural flight is “a big deal” for the destination known as the nature island.

“This is a very big deal for us. We already have dive groups booked on flights from Miami in January and February and we’re expecting that the huge diaspora market in the US will generate a lot of traffic as well,” Piper said.

He added that many island residents have already booked their flights to Miami for shopping trips during the upcoming Christmas holidays.

“December looks like it will have 90 per cent load factors in both directions,” Piper said.

This new service will see far more travellers journeying to the island as, in the past, air access to off-the-beaten track Dominica was limited to neighbouring islands on small puddle-jumpers or from Puerto Rico on turboprops operated by American Eagle and later by Envoy Air, Seaborne and Silver Airways.

To commemorate the launch of the service, there will be a ceremony at Gate B55 in Miami airport with speeches from island officials and gift packs for passengers, a water cannon welcome in Dominica and a ribbon-cutting ceremony before the return flight to Miami.

“This new service will be a game-changer for our tourism industry in Dominica, as it will allow direct access from the US mainland, one of our major source markets,” she added.

The minister of tourism noted that the decision by AA “affirms the value proposition that Dominica has as a tourism destination and will contribute tremendously to attaining our target of 200,000 stayover visitors by 2025.” (LETSTRAVELCARIBBEAN)