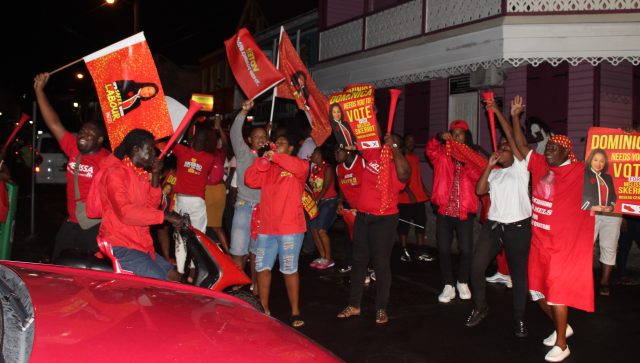 Dominicans went to the poll on December 6, 2019, amidst weeks of protest and court battles which ended on the eve of the elections with the court of appeal upholding the decision of the high court Judge of refusing to grant an injunction to stop the elections.

According to preliminary results of the election, the DLP won 18 of the 21 seats in the island’s parliament with the wife of the Prime Minister Melissia Skerrit comfortably winning the Roseau Central seat which has been a stronghold of the United Workers Party.

Joseph Isaac previously held that seat for the UWP but crossed the floor to the DLP and was made a government Minister, he contested the Roseau North seat for the DLP but lost.

Among the casualties for the opposition United Workers Party (UWP) is its deputy leader, attorney at law, Joshua Francis who lost his Roseau South seat to newcomer Cherika Lockhart Hypolite.

The UWP held six seats before the last general elections and the DLP 15.

Supporters of the Dominica Labour Party took to the streets in jubilation as they celebrated their party’s victory.