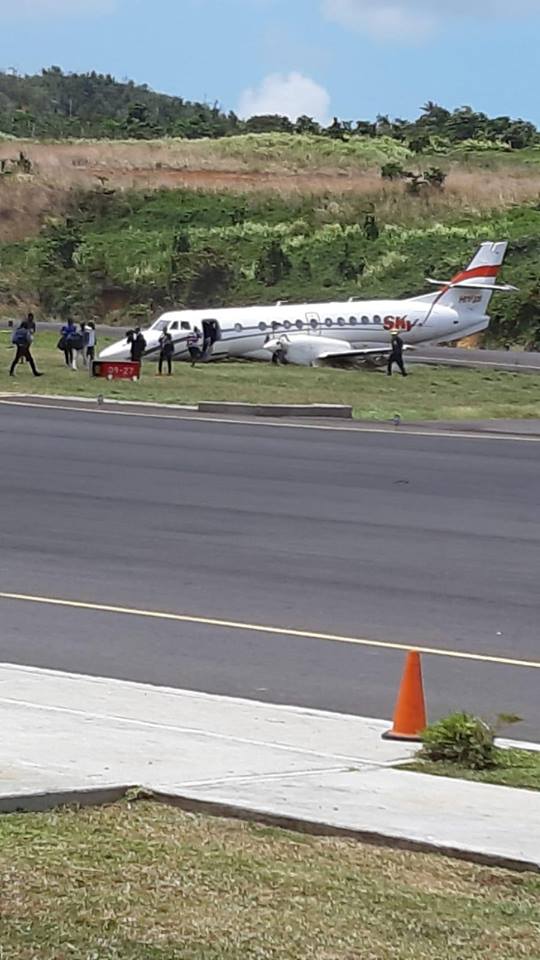 The Douglas Charles Airport is due to re-open later on Tuesday after investigators from the Eastern Caribbean Civil Aviation Authority (ECCAA) conduct investigations into the crash landing of a Sky High Services twin-engine aircraft on Monday, the chief executive officer of the Dominica Air and Seaport Authority, Benoit Bardouille has said.

Bardouille, speaking on the state-owned DBS radio Tuesday said that the ECCAA investigators had difficulties travelling to Dominica on Monday, but that they are due here later during the day and appealed to travellers to understand the situation.

(CMC Photo)
He said the twin-engine aircraft with 29 passengers and three crew members had originated from Santo Domingo and on landing here, the left landing gear failed and the aircraft veered to the left with the other landing gear also collapsing.

“The aircraft ended up somewhere between taxiway A and taxiway B. Onboard had 29 passengers and three crew. They all exited the aircraft without signs of injuries. Fire personnel put out a small fire that was on the aircraft and then we contacted the Eastern Caribbean Civil Aviation Authority and given the positioning of the aircraft …they advised that no traffic should be on the runway until such time they have completed their investigations,” Bardouille said.

“They had difficulty in getting here yesterday and they will be here this morning and we are hoping that things will go back to normal by lunchtime,” he said, apologising to travellers “for that inconvenience, however as you would know, safety comes first.

“We ask for their patience, we can clearly understand that the travellers are affected because of that situation,” he said.

There has been no official communication from the owners of the Dominican Republic-based airline regarding the incident at the airport, north of here.